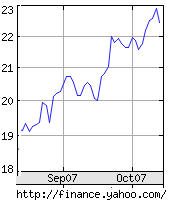 Oracle is negotiating to acquire software company BEA Systems for $6.7 billion, in a bid to continue its massive feast on other software companies over the past three years.

Oracle’s strategy has paid off — its stock price has revived, now that company has absorbed something like 35 prey, for more than $28 billion (past coverage) We’d originally expressed skepticism that the strategy was working.

The offer was made at $17 a share, a 25 percent premium over the company’s current worth. In the early post-bubble years, BEA had been one of Silicon Valley’s hottest companies. Its Web application servers did well as business applications came online, but then it got squeezed big competitors moving to adapt.

One apparent beneficiary is Carl Ichan, who had taken a large 13 percent position in BEA, and would see a big profit if the deal goes through.

Oracle announced two days ago it would buy LogicalApps.