Is Google-the-Goliath sneaking into the Facebook building — via the basement?

Google is actively recruiting third-party developers with applications on Facebook to run Adsense ads within applications pages, VentureBeat has learned.

These aren’t just any old Adsense ads, according to our sources — developers have been inserting plain-vanilla Adsense into Facebook applications since the developer platform launched in May. Now, Google is specifically building this network for advertisers who want to be on Facebook, and will let advertisers run their ads across all Facebook apps that sign up for it.

Facebook has been clear about letting third-party developers sell ads on their own “canvas” pages on the site and keep all the revenue — a loophole that the Google seems to fit through just fine. See sample screenshots of what the Google ads will look like, taken here from Fantasy Stock Exchange and South Park Character Creator (and no, I don’t regularly use either app): 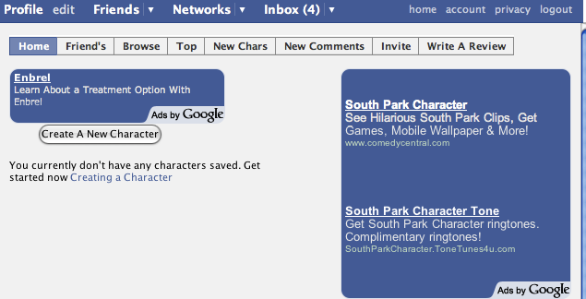 Microsoft has already inked an exclusive deal with Facebook to sell ads on Facebook pages within the US. By selling ads on third-party applications, Google is doing an end-run around this deal.

When it comes to Facebook and social networking, Google is apparently firing on all fronts.

Building relationships with Facebook advertisers also allows Google to test how to successfully monetize third party applications before it introduces its own developer platform. Google is apparently set to make an announcement on November 5 that it will give third party developers access to user data in Orkut, its own social network which is popular in Brazil and India but not in most other countries. To this end, it is also actively recruiting third-party developers on Facebook to develop on Orkut, we are told.

So far, only third-party startups that have launched ad networks for applications on Facebook, including those run by RockYou, VideoEgg, Social Media, Lookery and others. Some of these networks sell contextual text and video ads within an application’s pages. Some even sell ads on popular Facebook applications for less popular applications, so the latter group can try to convince Facebook users to add their application as well. Also of note: We’ve also been hearing rumors that Facebook is working on its own ad network for applications within Facebook.

Whether anyone can make big bucks from third-party applications is another question. We’re hearing from developers that all of these ad networks work about the same. We’re hearing some — those with 50,000 active users or more – are even getting enough to pay for their servers, room and board. That’s enough to avoid taking on funding while you work out your long-term business strategy.