Jiglu, a new service making use of contextual search for tagging and organizing the content of sites, is releasing its first offering today, aimed at the blogging community.

Regular auto-tagging software, such as Yahoo has offered for years, searches through a single block of text to find keywords. Jiglu, by comparison, uses semantic search technology to take tagging a step further, crawling entire websites to tag and categorize according to the relative importance of subjects.

The technology works by first determining important keywords within specific blocks of text, then drawing correlations between keywords in other blocks, assigning scores to keywords or phrases that come up repeatedly to produce a list of important tags. The software works continuously, adjusting its scoring system when new content is introduced.

The resulting tags are placed in a sidebar, or can be automatically link through existing text. A reference to a specific breed on a blog about dogs, for example, could be clicked on to bring up links to similar posts.

The service emulates the manual tagging and categorizing that bloggers have done for years. According to CEO Nigel Cannings, bloggers will prefer to use Jiglu, rather than expend the “cognitive overhead” required to effectively organize their sites.

Our feeling is that blogs are already crowded with competing services, from Sphere to Widgetbox add-ons. Any startup seeking to further the limited real-estate of blogs risks disappearing as soon as the shiny patina wears off.

However, Jiglu has possibilities well beyond blogs. Cannings pointed out that the software would also be effective for online document research or creating a knowledge base for discussion groups.

Jiglu can also spider larger sites or entire groups of sites (up to ten), such as blog networks or shopping portals, thus serving as a sort of analytical tool for subject-matter.

Cannings and his co-founder Stephen Hebditch plan to make money from the site in two ways: Offering a white-label version for publishers, and assisting in targeted advertising.

The company has taken a small round of seed funding. It plans on opening a California office for a new staff of developers, and hopes to take about $5 million more in funding. 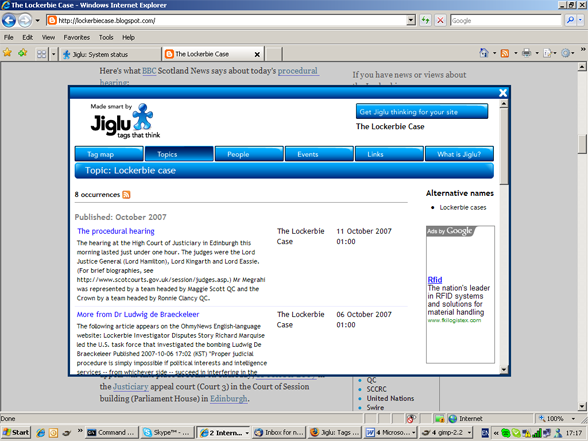