In ten years, an internet eternity, web-based email has only made token improvements, moving from Hotmail to Gmail. Meanwhile, instant messaging and social networks have rapidly developed.

Four new startups, all of which came out of secrecy this year, point toward a bright new future for email. These oddly-named saviors — Fuser, Orgoo, Xobni and Xoopit — have a simple goal. They want to centralize communication, and they want to give it structure and meaning.

Power users feel the pain of having to repeatedly switch between email and the address book, having to close one email before writing another, or losing track of instant messages as the write a new email. For lighter email users, only once email begins to stack up and conversations become lost or forgotten do their cries for help begin. The least committed email users may have dropped it entirely in favor of messaging on a platform like Facebook, which seems to offer many of the same basic features.

The individual aims of these companies differ. Fuser and Orgoo (previous coverage) both centralize communication, whether from email, instant messaging, a social network or even mobile SMS and video, in one simple interface. Xobni (previous coverage) is an overlay for Outlook that helps organize high-volume communications with a multi-functional sidebar. Xoopit organizes all those thousands of pages of archived email, pulling out meaningful content long since lost by the user.

While each is different, they recognize the same disease, and offer the same cures. To use the wording of Sean Rad, co-founder of Orgoo, the aim is to first aggregate all communication; next, integrate the separate streams into a single work flow; and finally, organize, to increase the efficiency and usefulness of email.

We’ll give a summary of each startup, followed by some thoughts from their top executives as to what’s in the future.

Fuser
Fuser pulls together its user’s communications, both from all of their email accounts as well as the social networks Facebook and MySpace. It then places the message-centers of each service in a single web based interface, providing a central place to catch up on what’s been happening everywhere.

According to the company’s president, Jeff Herman, “The problem is that most people today have multiple email, social networking accounts and so forth. You have to log in to five or six places to find out what’s going on. What we’re really going for is a virtual command center to pull together everything a person has.” 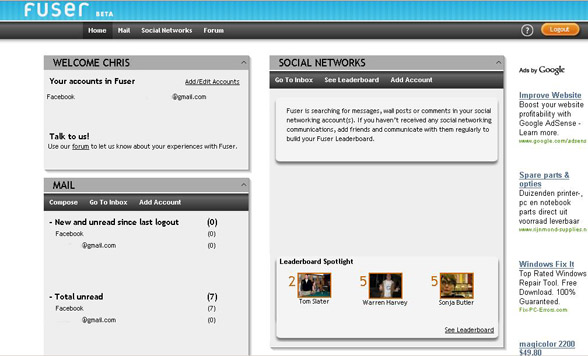 Orgoo
Orgoo, like Fuser, aggregates communication, but with an interface that more closely resembles traditional email. And while both Fuser and Orgoo can access any type of email account, Orgoo adds in instant messaging accounts rather than social networks, and also has a video chat option.

“As things stand, you have different accounts on all these services. If I email you, we continue our conversation by IM or phone. But I don’t have one single view of that conversation. We’ve taken the first step of integrating and allowing you to organize in one central location,” says Rad.

Both Fuser and Orgoo plan to add, as quickly as possible, features that the other has — Fuser will add instant messaging, while Orgoo will add social networking. Where the two companies differ is in their interface (see screenshots) and their target markets; Herman says that Fuser is aiming for the “middle American” market, while Orgoo seems to appeal to a more tech-savvy crowd. 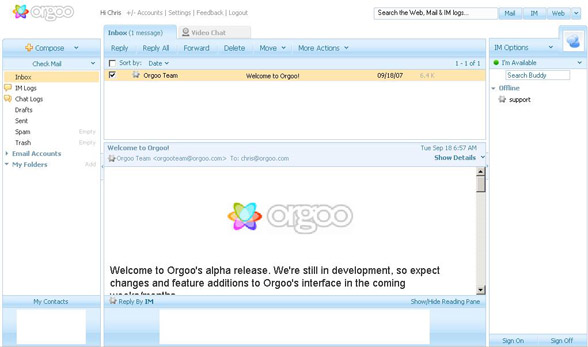 Xobni
Xobni attempts to help information-overloaded business people keep track of their contacts within Microsoft Outlook. A sidebar view shows the relationship of a message’s sender to the user, as well as a correspondence history, their contact information, and files exchanged — all without ever opening a single email, much less tracking through endless folders and conversational threads.

Despite some initial problems with the software’s implementation, with users complaining of excessive memory usage, co-founder Matt Brezina says demand has been strong from heckled Outlook users. “We decided to stick to Outlook because there’s a lot of pain there, and a lot of value that can be created for those users,”Brezina says. 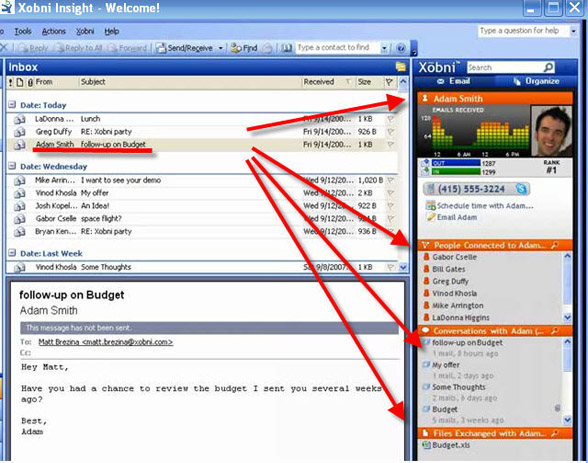 Xoopit
To Xoopit, the email inbox is a library in lack of the Dewey Decimal System. While co-founder Bijan Marashi is guarded in his statements about the company, which will come out of stealth mode later this year, he told us that the purpose of Xoopit is simply to organize email.

For example, Xoopit can search through every email ever sent to a user and pull out and compile a photo gallery from the attachments. Other content in emails can also be separated out. The idea is to make even old emails and content available without requiring hours of digging, much like separating a single towering stack of documents into organized filing cabinets.

The question is, just how painful is existing consumer email? The majority of us are lazy, and we’ll put up with a lot before learning a new system. Sure, our Yahoo Mail may be clunky at times, but it’s “good enough,” right? If they only appeal to a tiny sub-set of users, all four startups are doomed to failure.

However, there are examples of innovation in email paying off. When Zimbra, an enterprise email client, launched in 2005, we admit to doubting that it could challenge Outlook. It took two years, but the Ajax-based software took off, gaining enough momentum among users excited about its extensible features and add-ons to convince Yahoo to acquire it for $350 million, earlier this year. However, Zimbra isn’t (yet) for general consumer use, nor is it a standard web mail client like Yahoo or Google offers.

The lesson is that to have a chance, new email startups must be easy to use, and address multiple needs effectively. To become the command center for any internet user, email should go further, pulling together communication and making them more intuitive, and more useful.

Rad says that Orgoo’s goal is to make a user’s past communications reveal deeper patterns about them. If all your messages are aggregated in one place, the inbox can be the target of an automatic analysis to “allow people to explose the hidden social networks and the hidden information,” Rad says. “We want to create new ways for you to visualize email, easier ways to navigate through and see things in messages and relationships in a larger context. For example, if you look at Gmail, it groups your emails by subject line. That’s good, but there are a lot of other ways to group, whether by sender, topic or something else. You want to create a user interface that allows you to re-thread conversations and put them in context.”

Likewise, Fuser wants to dig into the wealth of information flowing through user’s accounts. While the site already features a “leaderboard” showing who users communicate with most on their social networks, it could gather more information, for instance keeping track of a friend even when she has different accounts as well. More such features are planned, but Herman also points to another important area for his company. “We’re aimed at middle America, where people are not technologists,” he says. “If you don’t make it very easy for people to set up accounts, you’ll lose them. To really win we have to focus on an interface that can be useful to mass America.”

Xobni’s co-founder Brezina says his company doesn’t plan on resting on its Outlook laurels, and may branch out to a high-powered web mail or a client that can, like Zimbra, act as a platform for developers, for example being able to automatically look up real estate prices and connect them information in an agent’s email. And like the other companies, Brezina thinks that email is a rich information resource about a person’s life. While Xobni already pulls out some information like phone numbers from email, there’s much more information waiting for someone to find an innovative way to highlight. “There’s a structure that just hasn’t been broken apart and exposed,” he says.

And when will a Google or Yahoo decide to change their own platforms? Xoopit founder Bijan Marashi compares the challenge of changing email to upgrading an operation system: “That’s a major overhaul of stuff consumers use every day, and the [OS] companies pull it off. If someone can really make this stuff simple, the majors might be able to take a lot of it away.”

Adoption or acquisition by a big company may be the best way for any of the four to succeed, providing them with the money and backing to spread their word.

We’ll follow these startups as they evolve. More this week, on related projects coming out of the Web 2.0 conference.