We’re hearing rumors that AOL and News Corp. were looking to acquire ValueClick — We checked with the companies last week, and they declined to comment. ValueClick’s value, and thus attractiveness, has just tumbled now that the online-ad company has said it will bring in less revenue than expected.
TubeMogul to sell online video analytics — The Berkeley, Calif. start-up supplies video-viewing data to Web publishers, so that they can track what videos are being watched. It a sort of Google Analytics, only for video. It has raised a seed round from NetService Ventures.

German Facebook-clone investors back again — The Samwer Brothers, famed for their propensity to back German companies that copy American models, have invested in Jimdo, the website creation tool. Not surprisingly, Jimdo’s tool (coverage here) looks quite similar to Weebly. This comes shortly after their investment in a Scibd copycat, Dotkus.de.

Facebook settles New York child-safety probe — Facebook, like MySpace, has been in the spotlight because pedophiles have used these social networks to contact children and expose them to porn. While a working group of attorney generals from all 50 states is still looking into the issue, New York state attorney general Andrew Cuomo announced today that his office had reached a settlement with Facebook. Cuomo had announced his own probe of Facebook’s privacy measures last month (previous coverage here). Under the agreement, Facebook will begin addressing complaints within 24 hours of being notified, responding to the the aggrieved party within 72 hours; it has also agreed to let an independent examiner oversee how it handles complaints.

Mochi Media launches MochiAds for casual games — The San Francisco company lets casual video game developers embed ads within their video-game creations, and includes analytics for measuring how much money the ads are bringing in (see screenshot, below). The company is just now launching to the public but it has already accumulated some impressive numbers. While in private beta, says it has already been working with 1000 game developers, serving over 100 million ads per month that have reached over 50 million gamers in total, worldwide. The company announced an undisclosed amount of funding from Accel Partners in August. 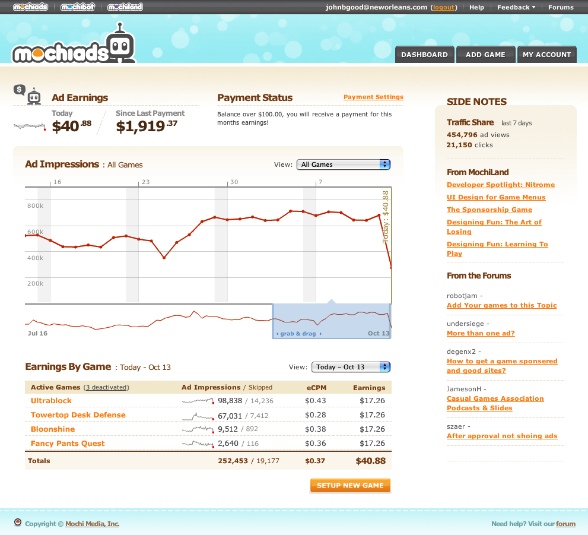 Google, Microsoft and Yahoo all reportedly courting Facebook — All are reportedly offering to invest in Facebook at a valuation of $15 billion. Details here.

AdMob poaches Google engineer — The stream of employees leaving Google has turned into a river. Google’s stock price has broken $600, we’re at the top of an advertising market cycle, and smart employees have to wonder how much short-term upside there’s left in that stock. Kevin Scott, a former engineering manager in search and advertising at Google, is now managing both the software and hardware infrastructure at the San Mateo, Calif., mobile ad company, Admob. The steal comes just as Google is starting to offer mobile Adsense.

California adds a further $125M to clean transport — California’s Governor Schwarzenegger signed a bill that will provide a further $125 million each year to clean vehicle and fuel technologies. The money could go towards new startups or existing companies like Tesla, which is based in the state. The bill, AB 118, follows a package Schwarzenegger signed into law last Friday which, among other initiatives, encourages the use of solar water heaters and attempts to cut energy usage.

San Francisco’s New Resource Bank receives $10M kick-start — The New Resource Bank, a so-called “green bank” that will provide loans for new cleantech projects to either consumers or businesses, has also benefitted from California’s embrace of all things cleantech. Treasurer Bill Lockyer approved an initial state investment of $10 million in the bank. Earlier this year, the new business passed $100 million in assets.