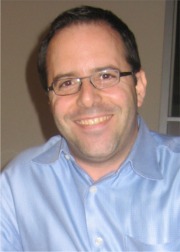 This week, we sat down with Nova Spivack (pictured left), the co-founder and CEO of Radar Networks. The company launched its first product, Twine, on Friday.

Twine is a tool that intelligently collects and organizes information like documents or web pages for professionals. It may represent the next generation of web applications, which some people have dubbed Web 3.0. Our full coverage is here.

This is an edited transcript of our interview, which contains a more theoretical discussion of Spivack’s view of the internet’s future:

VB: We’re hearing all about the semantic web and Web 3.0 now. What’s your take on the internet’s evolution?
Spivack: The semantic web is just one piece of what we’re calling Web 3.0. To me, Web 3.0 is statistics, linguistics, open data, computer intelligence, the wisdom of crowds and user-generated content all coming together. It’s not a specific technology. It’s a convergence that will take place in a certain period of time.

VB: So you don’t think we’re already moving into the next stage of the internet?
Spivack: There are little companies working here and there. I would classify the various players both in terms of their scope of ambition and their ability to execute on it. You have to ask, how good is the match between their technology and what they want to do? Right now, everyone’s already started to claim they’re semantic. I’m not sure all these applications really qualify.

People are throwing the term semantic around because it’s in vogue. In fact, it’s a term that has a specific meaning, and it was quite unpopular for a long time. Now all of a sudden it’s a hot term. So people either realize, hey, this might really work, or hey, someone might invest if I put this on the front of my product description. People used to do the same thing with words like folksonomy or AJAX. There’s going to be a lot of noise from companies in various verticals.

VB: So how should investors find their way forward?
Spivack: Investors should look very deeply at what each company is doing. It’s hard for investors, because they don’t always understand the concepts. But they need to look deeply at who’s behind the company, what those people really know about the technologies involved with the internet, and what the specific technology is behind the ideas for the company.

Right now, the semantic web is a sector. In about five years, it’ll be in everything. AJAX also began as a specific sector, but now it’s used in all the verticals. Similarly, I think semantics, natural language search and the computer intelligence we see coming down the pipe — they won’t be sectors, they’ll be part of every other sector. So they’re really important for investors to understand, because even if they don’t see themselves investing in the semantic web, it’ll still be relevant to whatever other sector they do put money into.

Understanding how it all ties together is very hard if you don’t have a strong background in computer science, linguistics, cognitive science, search or the other concepts we’re using. If you don’t know a lot about those, it all seems like hocus-pocus.

And to build a platform around it — the investment, dedication, time and pain required to do stuff like this is huge. Almost so huge that it could be considered insurmountable, maybe even insane. Plenty of VCs in the past have told me I’m insane to try doing what we are. Someday I want to publish a list of the rejections. I think it’d be funny.

VB: We’re not just talking about the next big play. Where should less ambitious entrepreneurs and developers look in the future?
Spivack: One of the interesting possibilities with the semantic web is that applications can get a lot thinner and more general, because a lot of the tools they need will exist in an open form outside the applications, that they can suck in as needed.

Today, applications can render data because they have the browser. It didn’t used to be that easy. You needed apps for rendering each thing. Now you don’t need them anymore. Applications can now easily render anything, but they still have to be specifically programmed for specific domains and types of data and functions.

So the applications will still be dumb, but they can use all the existing data and connections defined elsewhere to become smart. I think it’ll reduce the cost of writing applications, maintaining them, and integrating them. It’ll make them better, and users will be able to get more value out of those applications. The ideas is to create a knowledge commons where there are pools of knowledge that will develop around different domains. It won’t just be data, but will also be rules and axioms for using that data.

What’s really exciting is that there will be a time, not long from now — maybe 20 years, at most — when all human knowledge will be out on the web in machine-readable form. And every application will have access to that. We’ll see some profound, unpredictable kinds of new applications arise from those connections. The potential to make new things will be greater, as well as the potential for problems. It’ll really amplify everything. Stuff like Twine, some day we’ll look back and say well, that was a nice start. But it’ll be like comparing a jet plane to a horse and buggy.

VB: Your grandfather (Peter Drucker, a 20th century management guru) must figure into this somehow.
Spivack: We’re in the same family, but he was much more brilliant. He would read the encyclopedia for fun, and memorize it. And when he would talk, he would just quote from the encyclopedia. I once asked him how he did it, and he said, when I turned 50, suddenly I could do it. He was Austrian, he loved mountain climbing and mushroom hunting… not the psychedelic kind, but who knows, maybe one of those mushrooms had something in it.

Anyway, he was a cognitivist and a social theorist. He was very deep in that area. I think a lot of his work has been setting the stage for what I’m doing. He defined the term knowledge worker, and he thought about knowledge organizations and how they would change. He was thinking at a very high altitude about a theory. I’m really the other extreme. Everything I do is about making a tool.

It turns out that we meet somewhere in the middle, because the things I’m working on are connected to what he was thinking about. I’ve always spent a lot of time thinking about group minds and collective intelligence. These are terms I was throwing around in 1994. So back then, I was trying to write a book, and I showed him the first draft. It was all about how to help individuals and teams be smarter using the internet. It was called “Minding the Planet,” which is now the name of my blog. Anyway, he looked at the manuscript. He said, in this thick accent he had, “Well, Nova, one thing is certain. You will write this book. But, this is not the book.” (laughs) So the manuscript became my blog, and all the things I was wanting to say, I said in my blog, in a totally different way.

In the end, the thing I’ve always been dreaming of and wanting to make is actually taking shape in Twine. That is the tool I want, and the tool other knowledge workers I know need. To put what it does in economic terms, as he would, it reduces the cost of transactions. That doesn’t mean financial transactions. It can be anything, but in any kind of transaction there’s an initial cost called discovery. That cost is an inefficiency, so there’s always space for new businesses to reduce the cost of discovery. That’s what eBay does between sellers and buyers, or Google does between searchers and advertisers. For Twine, the first thing we’re interested in working with is knowledge, because you can put any kind of information into it. But it could also be something else, like product listings.

VB: Any last words on the semantic web, Web 3.0, or whatever else we’re calling it today?
Spivack: Some people misunderstand the semantic web. They think it won’t be about collective intelligence or folksonomies or bottom-up, user-driven content, like Web 2.0. They’re wrong. The semantic web standards, RDF and OWL and so forth, were designed to support precisely those activities. There’ll just be different ways of doing things, and they’ll be all about user-driven and bottom-up content, because people will still be publishing data all over the web and interacting with it.

The result will just be better. So things you’ve been doing in wikis, I think we can do better. Things you’ve done in folksonomies, we can do better. In particular deference to Tim O’Reilly, I’d say thanks for coming up with the Web 2.0 paradigm and teaching the world about it. Web 3.0 won’t replace those ideas from Web 2.0. It’s just building on the techniques and making them smarter.

You can think of it as Web 3.0, or the semantic web, or anything else. Really, it’s just Web 2.0 with a brain. The revolution is about data, and making it all smarter. Why did people notice, with Web 2.0, that something was different? It had a better user interface, new design patterns for user-generated content, tagging and the other social features. It’s all about social networks, applications, software — in other words, the social web. What’s going to be different about Web 3.0 is that it’ll be the intelligent web. You’ll see smart applications that are still social. That’s the big shift, and that’s where the value will be.