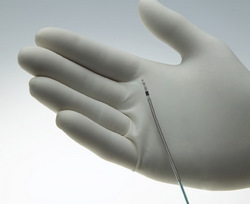 Medical-device startups are booming these days, as VCs throw money at everything from artificial spinal-disc fillers to implantable weight-control “neuromodulators” to vacuum devices that suck blood clots out of blocked vessels. (That appears to be in sharp contrast to biotech; see the most recent funding data here.) What relatively few people understand, however, is the degree to which the device industry benefits from looser regulations than those covering biotech — and how that might change if safety problems lead to changes at the FDA.

That’s exactly the sort of issue outlined in this story in today’s WSJ (subscription possibly required), which takes a close look at the faulty defibrillator leads recently recalled by their manufacturer, Medtronic. Those leads, formally known as the Sprint Fidelis 6949 (see photo above and to the left), are linked to five deaths over the past three years because the leads were likely to break and to deliver large, unexpected and sometimes fatal electric shocks to heart patients.

As it turns out, many — possibly even most — medical devices aren’t necessarily subjected to clinical trials, because they’re considered straightforward modifications of existing products. (Truly innovative devices are almost always run through such trials.) Similarly, the FDA doesn’t typically require manufacturers to conduct additional tests once devices are approved. Neither does the agency monitor reports of safety problems in a systematic way, instead relying on doctors and companies to file reports when issues crop up.

All of those factors converged in the Medtronic case to delay a final determination about safety problems with the Sprint Fidelity leads for more than six months. Although doctors at the Minneapolis Heart Institute suspected problems back in January, Medtronic didn’t recall the leads until earlier this month. The FDA played a largely passive role, relying mostly on Medtronics’ analysis of its own safety database even as other doctors raised alarms.

The remedy isn’t clear. The FDA, pushed by Congress, is starting to become somewhat more proactive about tracking and analyzing problems with devices and drugs, but its reforms are still in their infancy. Meanwhile, there’s concern — some of it legitimate — that forcing manufacturers to conduct additional clinical trials could slow the pace of innovation in the field. Should that happen, though, the device makers who have taken advantage of today’s lax rules may have no one but themselves to blame.

UPDATE: The WSJ health blog has a good summary of the WSJ story here.