[Updated: OpenSocial is expanding, see the new graph in this story.] 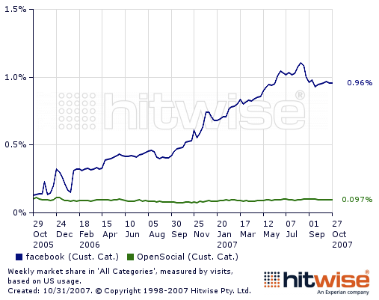 Internet traffic analysis company Hitwise just sent us an interesting graph comparing the percentage of US web users that have visited Facebook each week for the last two years, versus those who have visited Orkut, Hi5, Friendster, Plaxo, Linkedin and Ning.

If this data is accurate, and Facebook really is getting nearly ten times more visitors than the OpenSocial crew, it raises questions about how significant OpenSocial can be within such a small portion of the US web.

The major caveat, of course, is that services like Orkut, Hi5 and Friendster are huge in other parts of the world. Hitwise also doesn’t track Ning white label social networks. Site like OpenCoffee Club wouldn’t be counted in this measurement, for example.

You can read more from Hitwise, here.

However more sites appear to be looking to join and see how OpenSocial works for them. There are suggestions, for example from a commenter here and a rumor here that SixApart, a large blog platform company that has a close relationship with employees at Google, is joining. We’re checking in to confirm. 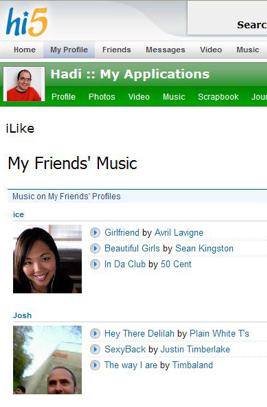 Techcrunch has also just published a nice-looking set of screenshots featuring various apps in various social networks via OpenSocial. Screenshot, left, of iLike’s app on Hi5’s social network.As we’ve said before, the largest application developer companies — RockYou, Slide, iLike, Flixster, etc. — may be able to advertise their new apps to their existing user bases, giving them a head start in over other developers. RockYou and Slide, notably, already have millions of Flash-widgets embedded in Hi5, Friendster and other OpenSocial sites.