So here’s a question: Are we in a bubble when a company can raise $3 million Canadian dollars ($US 3.15 million) to create a new online video destination site?

Is it even bubblier when this company — which is called mDialog — convinces its angel investors that, in an environment deluged with an incomprehensibly large mass of free video content, it will make money by sharing subscription revenue with its as-of-yet-to-be-acquired high-quality content producers?

Well, maybe. But Toronto’s mDialog actually has an interesting offering. Licensing Apple’s MPEG4 H.264 video standard, it has built a desktop-based video uploading tool that lets you make large, high-quality video files into smaller files without sacrificing much quality. Most of the time, video conversion is handled on the server side and converting a 2GB file is not an easy task. These videos can be viewed on the site or downloaded and work with iPhones, iPods, and AppleTV.

The idea is that by working with Apple devices, combined with the ability to compress videos yet maintain their quality, mDialog will convince professional content producers — starting with independent film makers — to eschew other means of distribution and use mDialog as a storefront for their material. It also is working on a B2B model where it will help film festivals deal with submissions. On both fronts, it directly competes against Jaman, and to a lesser exctent, Babelgum. The former already has a large store of high-quality independent film for rent and download and worked with the prominent Tribeca Film Festival earlier this year. Jaman also hacked its way onto AppleTV, but unlike mDialog, did so without Apple’s approval.

mDialog has constructed a hypothetical business model around the concept of “narrowcasting,” which means it lets you create video channels for your own content and limit access to these channels to friends or, more importantly, paying subscribers. The company says that until the online video world figures out how to best use advertising, subscriptions make the most sense.

We’re not so sure. The video market is insanely crowded, and most of it is free, so the company is in for a rough ride. But, because mDialog can deliver content that works seamlessly (and legitimately) with Apple’s products, it might have some appeal. It’s not impossible to imagine it using that leverage to force its way into the niche.

It is quite hard, however, to imagine it accomplishing this as a destination site, and if mDialog wants to be anything more than doomed, it will probably have to rethink its approach, and fast. 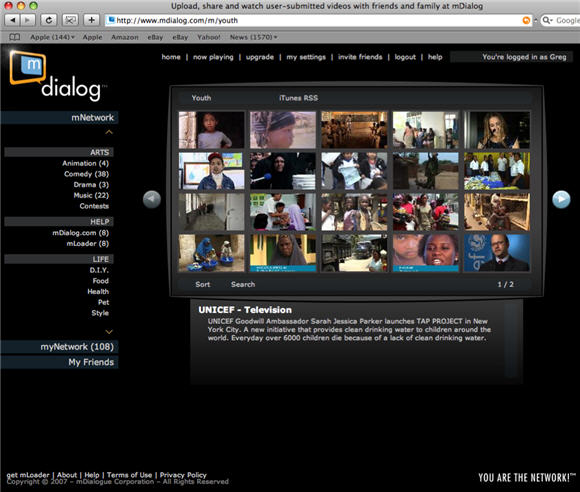