A source has told us in some detail what Facebook will be launching on Tuesday, having seen and played with Facebook’s offerings.

Pending the outcome of an internal debate within Facebook, these pages may include a number of vertical categories, such as movies, music, restaurants, travel, nonprofits, and others.

Facebook has already developed applications for these categories, that we understand to compete directly with many successful third party applications on Facebook already in these categories. Instead of using Flixster to rate movies or iLike to play music games, you may soon find yourself playing Facebook’s version of these applications — then finding yourself getting directed to relevant advertisers’ pages.

Actions users take on these pages will appear within friends’ news feeds — if the advertiser that purchases the page is willing to pay an extra fee. These pages will also have their own URLs, such as www.facebook.com/venturebeat, and will be searchable on the web.

Large Facebook application developers like Slide, RockYou, iLike and Flixster may have embraced the Google-led OpenSocial movement so fervently earlier this week because they learned of these developments.

More whimsical applications, such as Zombies, won’t be affected, our source says.

The code name for the advertiser pages that will replace sponsored groups: Mullets.

Silicon Valley Insider has recently reported on some aspects of this offering.

Facebook will also launch a way for Facebook user to tell their friends what they buy online, something Techcrunch has also learned of (where we got these screenshots from). Let’s say you go and buy tickets to visit your relatives in Hawaii on Orbitz. A button provided by Facebook within the Orbitz purchase page will give you the option to alert all of your friends, with a notification appearing in their news feeds describing what you bought and where you bought it.

Both the advertiser pages and the purchase notifications will self-service, and are designed to be an alternative against Google’s self-service advertising.

Our source doesn’t know what role cookie-tracking might play in what Facebook does, which multiple sources believe to be forthcoming. 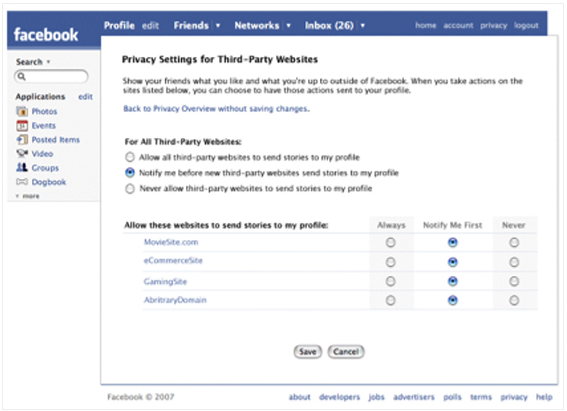