Socialtext, the early wiki company, has raised $9.5 million in a third round of financing.

Socialtext is one of a number companies loading delivering “social software” to large companies, helping employees collaborate in real-time on documents in ways they haven’t done in the past. It has recently expanded beyond mere wikis, or Web pages that multiple people can edit at the same time, and now offers multiple social networking tools, such as social bookmarking, where employees bookmark online documents that they can share with their colleagues.

The company is going up against players like Jive Software, which recently raised $15 million from Sequoia Capital.

Gartner recently concluded that no company has stolen a leadership position within the social software sector. However, it placed Socialtext close to the so-called upper right “magic quadrant,” making it one of the leading start-ups in the same league as large companies Microsoft,  IBM and BEA (see chart below).

Other wiki players include Jot (now owned by Google), PBWiki, Wetpaint and Wikia. However, they are consumer focused, and don’t sell to large companies.

Socialtext says it has 4,000 customers, including Nokia, Basf, USA Today and Ikea.

The company isn’t profitable yet. It employs 50 people in Palo Alto, Calif. 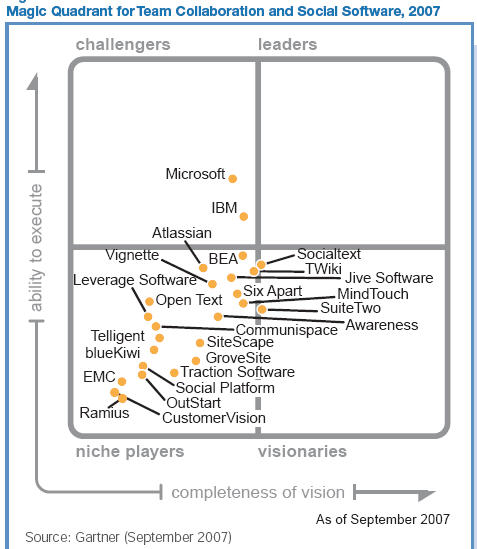