Trulia, a web site that lets you search for homes, today launches a way for real estate agents to pay to to reach you with their listings.

The feature comes at a time when Trulia is showing traffic momentum, even as a competitor Zillow is struggling with stagnating traffic.

For $50 per month, agents can pick up to ten of their home listings to be featured in Trulia’s results when people search for homes. Better yet, they’ll be listed among the top three search results. The prominent placement means users are more likely to click them to find out more.

In testing of the feature, called Agent Featured Listings, agents who participated received four times more traffic to their featured listings than other listings received. Trulia did not report if the additional traffic actually led to more home sales. A featured ad may deliver more clicks, but it remains to be seen if those clicks convert to dollars.

A big challenge for real estate websites like Trulia, a San Francisco company, and for competitor Zillow, of Seattle, is that home transactions occur offline. This makes it difficult for advertisers to track results, because clicks may generate leads, but big question marks hang over the rest of the transaction. So it’s hard for an efficient market to develop around the real estate sites. The big challenge for these sites is how can they capture more of the value, such as a portion of agent commissions, simply by generating clicks.

Trulia’s new subscription-based service model contrasts with the model most companies rely on. Zillow relies on both CPM (a rate paid by an advertiser for every thousand ads viewed) and CPC (cost per click), meaning advertisers pay Zillow a certain amount if users click on their ads). These CPM and CPC models work well when traffic and CPC prices are high. CPM ads account for about 90% of Zillow’s revenue and the rest is CPC, according to Zillow Chief Financial Officer Spencer Rascoff. 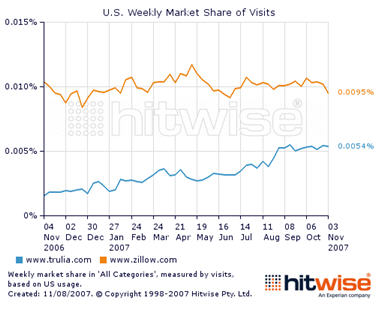 At left is Zillow.com’s daily U.S. unique users, according to Quantcast.
Trulia CEO Pete Flint said the company spends hardly any money to market itself using ads on other sites, such as on Google or Yahoo.

Despite considerable press coverage given to Zillow’s controversial practice of providing estimates for home values, and its large staff of 155 employees, it’s not clear how the company plans to make money. Zillow appears committed to the CPM and CPC models, but will Zillow follow Trulia and offer a subscription service? We’ve requested comment from Zillow, and will update accordingly.

In September, Zillow raised $30 million from an institutional investor, Legg Mason Capital Management, bringing the total raised to $87 million. Legg is led by legendary investor Bill Miller, who until last year had a 15 year streak for generating returns beating the S&P 500 benchmark each year.

But why is Legg — known for its investments in public companies — investing in private internet companies? Legg started by investing in Spot Runner in March. Since, Legg has made five other investments (some of them not publicly announced), including in Ning, a social network service. Legg invested after Rascoff put out a request for bids in July, according to Legg Director of Research Randy Befumo.

Befumo said Legg has expertise investing in the internet sector and pointed out Legg is a major shareholder in Amazon, InterActiveCorp, Yahoo and Expedia.

Befumo said institutional investors like Legg will take the role formerly served by IPO’s in 1997 and 1998. At that time, internet companies without business models went public to raise capital in order to figure out how to make money. Befumo said institutional investors are better suited to assume that risk than individual investors in the public markets. Befumo acknowledged investments like these can have “binary” outcomes, either making a lot or none at all.

In the meantime, Zillow is throwing money at hiring engineers, though it’s not certain why. Zillow has 155 employees, and 108 of them are technical workers, of which the “vast majority” are software developers, according to Rascoff.

Zillow has 30 open positions and the company targets an employee count in the low 200’s, according to Rascoff. He said new hires are important to building the ad business (Zillow has 25 people on its ad sales team) and developing new features to attract users. Given competitor Trulia is rapidly catching up with Zillow despite having only 47 employees, the lingering question is why isn’t Zillow’s traffic growing faster?

Zillow’s user community appears weak. See Zillow discussions in Seattle, the company’s home turf. They’re essentially non-existent. Trulia, by contrast, shows much more life . Zillow’s local discussions pages are not as active because Zillow has chosen to not actively promote them yet, according to Rascoff. Zillow’s Discussion boards have over 85,000 posts since launch. Still, a vibrant local community may be important to helping local home buyers interact with real estate professionals in their area, and in that Trulia has an edge.

Both Zillow and Trulia are working on how to build profitable businesses. With today’s launch, Trulia is experimenting with a new business model. Flint said Trulia will be profitable before most expect it to be, but would not estimate a date. Until then, it remains to be seen what business model will be effective enough for real estate websites to justify the investments, especially for Zillow.