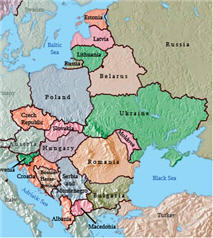 Cisco, the giant networking company, has expanded its venture capital investments to central and eastern Europe, taking a majority stake in a 30 million Euro ($40 million) fund there.

It comes at a time of a flurry of investment activity in the eastern European and Russia region, an area that has so far been starved of venture capital. The region has a plentiful supply of well educated engineers, and so could be promising. Cisco started a venture investing in Russia earlier this year. The Russian government has just doubled its own commitment to support venture activities there, to $1.25 billion.

Cisco has been more fleet-footed in the region than some of the nimbler venture capital firms, such as Draper Fisher Jurvetson, which only recently announced it had started investing in Russia and Israel.
There are few, if any, other U.S. venture firms are active in the eastern Europe or Russia region.

DFJ celebrated the raising of its Russia fund last week (see a write up here by Alex Haislip). DFJ’s is one of three funds that is beginning to invest in Russia, part of an government-sponsored initiative written about here in detail by Yuri Ammosov, the Russian official who helped organize it.

In fact, Ammosov (left) invited me to moderate a panel last week at the Computer History Museum in Mountain View, Calif., here in Silicon Valley, to discuss the Russian VC scene. It’s striking just how little venture capital has been deployed in Russia. Mangrove Capital Partners has made an investment or two, but otherwise its about zilch. (See this Powerpoint by the Russian government about the VC activity there, and the opportunity for growth).

Government official Ammosov is trying to change that, and if his forceful personality is any measure, he’s likely to pull it off. He dominated the panel discussion, which also included Don Wood, of DFJ; Pitch Johnson, one of Silicon Valley’s first VCs, and one of the first U.S. VCs to invest in Russia; and Israeli Eldad Tamir, founder of venture firm Tamir Fishman. At one point Ammosov took issue with Pitch Johnson’s contention that the biggest Russia opportunity is in early-stage investing. Ammosov suggested that Johnson might be trying to divert attention to early stage investing, so that he could horde late-stage investing in life-sciences for his own firm (Johnson is affiliated with one of the new funds that is investing in Russia, though is not directly a partner).

At one point, I asked DFJ’s Wood about what he thought of Russia’s political climate, where freedom of the press is under challenge and where the nation’s secret service has infiltrated some of private industry. Interestingly, the Russian officials seemed to encourage the questioning.

Meanwhile, I’m hearing Ammosov is about to enter private industry himself.

The general view is that there are lots of promising Russian developers but very few promising young technology companies. A representative of Sun told me recently that Sun had sought to expand its marketing efforts abroad, but had downplayed its efforts in Russia recently, after noting there were few early-stage fast growing companies to market to.

Which is what makes Cisco’s initiative so interesting. Its VC efforts abroad are encouraging: Most recently, its $17.5 million into the IPO of Alibaba.com turned out to be quite lucrative, after the company’s stock almost tripled on the first day of trading.

Cisco has invested $2 billion in venture capital investments in China, India, Israel, and Europe and the United States.

The eastern European Cisco fund will be managed by a regional venture capital firm, called 3TS Capital Partners, which has already successfully invested two prior funds, making it one of the more respected investors there, said Hilton Romanski, senior director of Global Corporate Business Development for Cisco. Cisco is the sole investor in the fund.

This latest is 3TS’s third fund in eastern Europe. The Cisco effort will invests in fast growing companies in technology, media and telecommunications sectors. One sign that the firm is competent is that it performed well on investments made from its first fund, raised in 1999. That was a tough year for most venture capital firms; it was when the global Internet and telecom bubble burst, and many investments went south. Included in 3TS’s investments (see full list) from that prior fund are STK Cable, a Polish TV cable provider; Systinet, a web services company in the Czech Republic, and Orange Slovensko, a GSM mobile telephony in Slovenia, and Mobiltel EAD, the largest GSM mobile telephony operator in Bulgaria.

Cisco’s move to back a local venture firm follows a similar strategy it has undertaken in other regions, including in Israel, India and China. In each case, Cisco follows a three-step process: First, it feels out a region by taking a dominant stake in a venture capital firm, leaving it to that firm’s partners to manage the investments. Then, as it gains its footing, Cisco starts investing alongside the fund. Finally, it makes its own investments independently. Cisco backed Sequoia and Benchmark in the early funds launched by those firms in Israel, for example, but is now making its own investments there, and making a steady string of acquisitions.

Cisco has not previously made any investments in the region.

It has, however, made a bet in Russia, namely on the Russian equivalent of Amazon.com, a company called Ozon.ru, which is expected to go public at some point.