Bebo, a large social network that’s especially popular in the UK, has launched a way for large media companies to deliver their videos directly within the site.

The social network will let media companies use their own video player technology to present videos to Bebo’s users, and let those companies keep all the revenue from ads within their videos.

The service is called Open Media, and it includes a recommendation feature that shows users what videos their friends like. It also includes “channels” where companies can offer only their own videos, that include forums, blogs, photos and other features for Bebo users to talk about what they’re watching.

Compared to competitors, Bebo is establishing clearer rules around distribution and monetization, and forging stronger relationships with specific big-media partners. 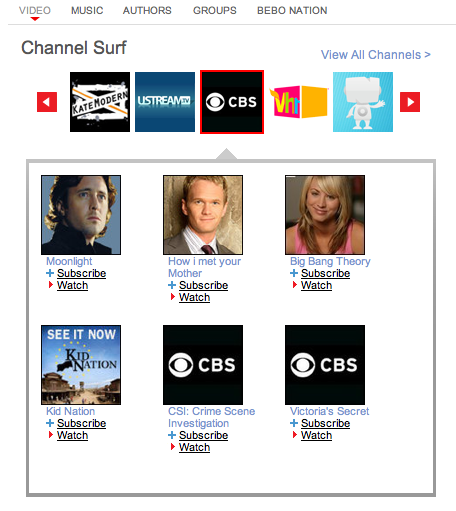 It already offers a book “authors” section and a music section. Video syndication is another part of the same strategy — it brings in lots of compelling material that keeps people on the Bebo site, letting them sell ads that are relevant to what people are already interacting with see.

We recently interviewed a departing Bebo co-founder, who emphasized the value of advertising to users on social networks.

Bebo claims to have more than 40 million users worldwide, although its not clear how many of them are active per month. Bebo users spend 40 minutes on the site each day, according to Comscore.

The San Francisco-based company has already signed up a long list of big name partners, including MTV, ESPN, BBC, CBS, Yahoo! and others as well as startup video sites such as Crackle and Ustream.

On Myspace, videos are typically distributed through YouTube video player widgets or Myspace’s own video player. On Facebook, videos are distributed through the company’s own video application, or other third-party applications. Neither has made a point of cutting deals with specific companies to build features designed for them. They could, of course. But Facebook has chosen to market its developer platform as a place where any developer can launch a successful application, whether the developer is an individual, a large company, or even Facebook.

Notably, Bebo — along with Myspace and many other social networks — is a member of the Google-led Open Social project, lets developers build applications that can be implemented easily across social networks. This means video applications for OpenSocial may be introduced to the site which compete with the media companies that are offering videos through Open Media.

Media partners can join Open Media on their own. For partners that don’t have a video player or video advertising sales team, Bebo will offer its own services.