(updated with response from Hercules) 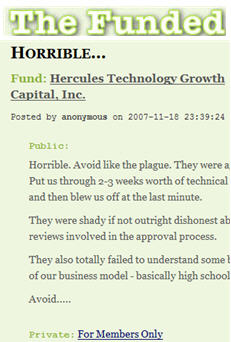 Hercules Technology, a Silicon Valley debt firm, has sent The Funded, a site that lets CEOs comment on their investors, with a “cease and desist” letter.

The letter cites a posting on The Funded that says Hercules is “horrible” and recommends that other CEOs should “avoid it like the plague.” Hercules misrepresented its investment review process and failed to understand basic math, the commenter continued.

Hercules’ letter to The Funded said the comment violates the California Business and Professions Code, that it’s false and defamatory and constitutes trade libel. Hercules said the comment is causing Hercules “severe and irreparable harm.”

The letter is the first C&D received by The Funded since the site started ruffling the feathers of the venture capital community several months ago — when it first opened up its site for CEOs to comment anonymously. See our coverage of the controversial site here.

We’ve pasted below a copy of the Hercules letter, which was forwarded to us by The Funded.

Adeo Ressi, chief executive of The Funded, told VentureBeat he believes the request by Hercules is itself a violation of the Communications Decency Act.

He said he has had no dealings with Hercules and had nothing to do with the comment, and that the Communications Decency Act protects operators of web sites from liability for remarks made by others in comments.

[Update: Hercules’ chief executive Manuel Henriquez responded as follows to our request for comment: “Unfortunately we do not comment on pending legal action or on anonymous disparaging or slanderous posting which chose to hide behind anonymous attribution. We find such actions to be careless and site (sic) should fact check the facts to confirm if there is any evidence to support such claims or at a minimum provide attribution for comment postings.”]

Ressi said he’d counsel Hercules to follow the reverse strategy: “I would listen to the criticism, respond and encourage the next batch of CEOs that they work with that have a good experience, and have them post about that, rather than attack the innocent operator that provides a forum for CEOs to provide their views.”

Ressi only two weeks ago unveiled his identity at an event in Palo Alto. Ressi said the legal action was inevitable, now that upset investors had a place to mail their complaints to.

Hercules said it will take legal action if the comment isn’t taken down by the tomorrow. Ressi said he isn’t taking it down, so this should get interesting.

Has The Funded crossed the line? Is the single anonymous review about the firm, expressing mainly opinion and few solid facts, but aggressively negative nonetheless, enough to cause “irreparable” harm? We’re not taking sides, but what do you think?

[Disclosure: VentureBeat has a relationship with The Funded, which includes cross-linking to each other’s sites] 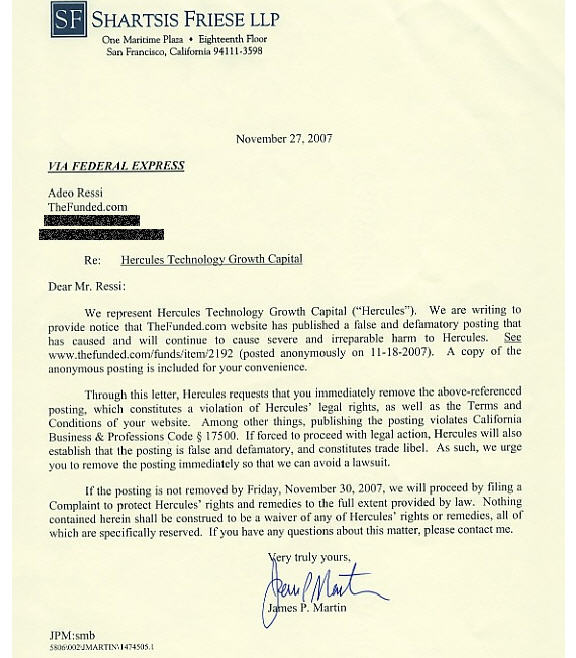 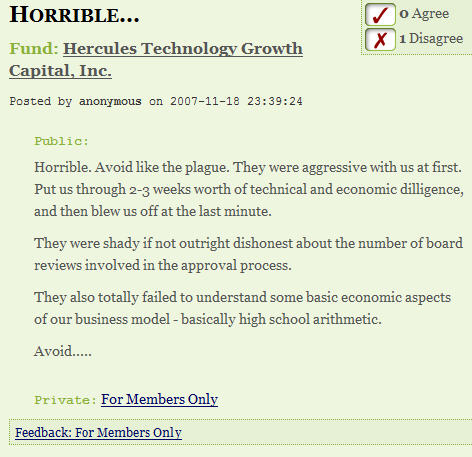