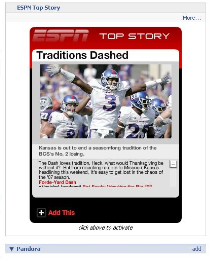 In the latest evolution of this fast-paced but not yet lucrative world of widgets, Clearspring, a leading widget company, has launched an ad network for widgets (sample widget left).

It comes at a time when advertising agencies on Madison Avenue are finally getting comfortable with the idea of buying ads in widgets to get their client companies in front of social network users. A market for widget ads is forming, although its still unclear which forms of widget ads will deliver the best results.

The McLean, Virginia will use Adify‘s ad technology, including ad serving, ad operations and ad reporting. PointRoll will be the exclusive provider of its ad units and technology that allows interaction within ads.

This news follows other widget-related announcements last week. Leading advertising network Advertising.com launched its so-called “WIDGNET” network, another ad network. Webs.com (formerly Freewebs.com), launched what it calls a “Social Gaming Network” — interactive gaming applications that run in social networks and rely on social network data. As in-gaming advertisers like MochiMedia are showing, this niche can be quite valuable.

Also, PointRoll — the Clearspring partner — will give advertisers the option to “widgetize” their rich media banners, so the next time an ad for a theatrical release expands over the page you are reading, you can “snaggle” a widget from the ad and put it on your MySpace or Facebook page.

For the uninitiated, a widget works when a website owner places an embeddable snippet of code on a web page. Widgets are also called gadgets, Widgets with a capital W (at Yahoo), minis, flakes, snippets and badges. Facebook applications, and now Google-led OpenSocial applications, are more advanced: These widgets offer third parties access to their data, so applications can design interactions around your relationships.

Otherwise, what distinguishes a widget company is largely semantic. YouTube is a massive widget distributor while MySpace (and now Facebook) are huge widget receptacles. MySpace, as the first mass-scale social network to allow users drop widgets into their page, is largely responsible for the growth and reach of widget companies like Photobucket and Slide. Now Facebook and other company’s platforms are similarly responsible for the birth of a new category of start-ups, technologies and revenue streams.

The advent of Facebook’s platform in May changed the game for widget companies because — beyond the new access to valuable user data – it let third parties make money without fear of being banned. Myspace, for example, sometimes blocked Photobucket, although it eventually bought it.

Now these widget companies are gunning for Madison Avenue, with overlapping but increasingly differentiated strategies to build, distribute, and track widgets across social networks.

Or is Madison Ave gunning for them? Ro Choy, VP of Business Development for RockYou says the adoption of Facebook applications by large advertisers has been “radical.”

Here’s who’s in the game and what they’re doing:

Clearspring earned its reputation as the market leader developing widgets for Big Media, and counts among its clients NBC (exclusively), Disney (recently launched over a dozen widgets for ESPN) and Turner.

Clearspring’s network allows advertisers to distribute their widgets across properties like Break.com, The Huffington Post, NHL.com, 20th Century Fox, and paparazzi haven X17online. Virgin Mobile is sponsoring a Futurama widget running on Fox’s site (see screenshot). Clearspring gets a cut of the revenue as well as possible development fees. If Fox wants to offer one of its own advertisers a widget integration, Clearspring now gets a cut of that deal too.

Peggy Fry, a former vice president of sales at Netflix and AOL Time Warner, is well-positioned to head up the advertising effort for Clearspring, and several people I interviewed attested to Clearspring’s mindshare in the market.

However, one executive familiar with the situation notes that the relationship is growing uncomfortable as the companies deal with overlap in services.

There are other, smaller players that are trying to do what Clearspring does, including Musestorm for example (see our coverage).

Webs.com‘s sales efforts are being led by Chris Cunningham, a regular on the Madison social circuit, who’s become a go-to widget evangelist and educator for ad agencies. The company is trying to monetize the millions of pages people have created with Freewebs service, which lets people create their own web pages. The company wans to make sure ads are relevant for its users, and so wants to match them according to each site’s subject matter.

Webs.com builds and distributes widgets, but relies on companies like Clearspring and YourMinis to provide the tracking analytics for how widgets perform. It wants to distribute widgets through its new game network.

According to a source, the company has a quarter-million dollar deal on the table to develop a Facebook app for a client. Webs.com already includes P&G, Ford, Universal Pictures, Sony and AT&T in their roster of ad clients.

YourMinis, a service launched by Mark Cuban-funded Goowy, lacks the sales presence of Clearspring or Webs.com but is another notable widget contender. Clients from CBS (multiple deals in place) to MTV, AOL, Redbull and Real Networks use YourMinis to build, syndicate and track brand-content widgets. Similar to Clearspring, YourMinis syndicates its widgets to the top social networks, blog platforms and Facebook apps, but also offers desktop extensions to Adobe AIR and Mac Leopard.

Developers whose widgets get under 50,000 views a month use YourMini’s services for free, while clients above that threshold pay a widget development fee and a monthly fee for syndication, hosting and analytics.

Slide has enjoyed its position as the largest widget distribution service online, with three of the top ten Facebook applications (apparently ceding the #1 Facebook app spot to RockYou’s SuperWall last week). Since the company’s user base is built upon consumer-powered widgets like photo slideshows, its approach to monetization has been markedly different. In August, Slide started allowing users to incorporate branded images into their widgets, with Paramount Pictures, AT&T Wireless, Activision and the Discovery Channel as early ad partners (VB coverage here).

Slide is emphatically not in the business of making and distributing branded widgets. It is more focused on carefully monetizing their existing ones. Within Facebook, Slide is now experimenting with skinning canvas pages (pages where users interact with Apps) and it recently ran a campaign with Comedy Central, allowing users to skin their slideshows with a promotion for the Sarah Silverman show. Nam notes that an impressive 5 percent of users clicked further to watch a video promo of the show from within their slideshow. Unlike RockYou’s ad network, Slide appears to have no plans to leverage its Facebook presence for pay-for-play for other widgets.

Before Facebook Apps, RockYou was focused on doing things like adding features like glitter text to its Myspace slideshow widget. As of last week, they now hold claim to the most popular app on Facebook (their SuperWall has surpassed Slide.com’s FunWall) and they’re reaching some 40 million Facebook users a month, by Quantcast’s measure.

They launched an ad network shortly after the Facebook Apps launch (VB coverage here) designed to leverage their presence on Facebook to promote other apps. They started by offering cross-installs and now offer banner-style advertising on their canvas pages.

RockYou’s opportunity for real advertising dollars has been a bit unclear. Goowy CEO Alex Bard notes: “If you think about the majority of what RockYou is doing, let’s call it widget advertising revenue, it has come from promoting other applications. It hasn’t been in true ads, right? I’ve got an application, I want to distribute it as quickly as possible. More like a widget distribution network.”

Indeed, RockYou VP of Business Development Ro Choy notes that half of the top 50 apps on Facebook are paying clients in RockYou’s ad network. He also points to deals with Expedia, Paramount, Sony Pictures and CBS News to explain their foray into traditional ad dollars. Paramount didn’t want to take the leap into developing a full Facebook App, so instead they developed a quiz for the upcoming Sweeny Todd theatrical release. It’s integrated into the existing Likeness Quiz App, is seeing some 15-30K completed quizzes a day, and is getting virally extended through Facebook Feed updates. This mass reach on Facebook and readiness to leverage it has garnered interest from major agencies like Ogilvy, Digitas and 360i. Average RockYou deal size? $30-70,000, par for the widget course, the company says.

RockYou works with partners to build applications too, including with ContextOptional, Trignos and RealBranding. RockYou handles distribution. Clearspring provides their tracking analytics.