Plaxo, the company that synchronizes your contacts across email and web services, has introduced a new version of its desktop toolbar for Outlook.

Before, you could see, sync and contact your Plaxo connections within Microsoft Outlook, using Plaxo information. Now, you can also see your contacts’ “Pulse.”

It is another step in making Plaxo useful on a daily basis — hopefully these latest efforts haven’t come too late. We’ve heard rumors that the company has been shopped around for a cheap sale in an effort to return money to its investors.

While many early adopters in the tech world are busy using Gmail, Thunderbird or other newer email services, most of the business world is forced to use Outlook. If the toolbar proves to save businesspeople significant time, it will give Plaxo an influx of business users.

However, Pulse will need to include feeds from business-related applications like calendars and project management systems in order for it to be useful while you’re working. Right now, most of the available feeds are from consumer web applications.

Mountain View, Calif.-based Plaxo already offers a set of premium services, including integration with your contacts in business social network LinkedIn. If the Outlook toolbar proves useful for business users, Plaxo will then have a great opportunity to convert them to paying customers.

The Plaxo vision of creating a universal address book was ahead of its time when the company launched in 2001. Back then, not many web services gave you an easy way to import and export your personal data.

Today, many services — from LinkedIn to Google applications to Facebook — are experimenting with letting you import and export your data between sites. New efforts like OpenSocial promise to eventually let third-party applications share your data across social networks and business software. Plaxo has a big opportunity to be at the center of this new, more networked web. It knows this: It was a ringleader in pushing the OpenSocial project forward.

The company has previously raised nearly $20 million from Cisco Systems, Sequoia, Globespan Capital Partners, Harbinger Venture Management, and angel investors including Ram Shriram and Tim Koogle. It closed its last round of funding in 2004. 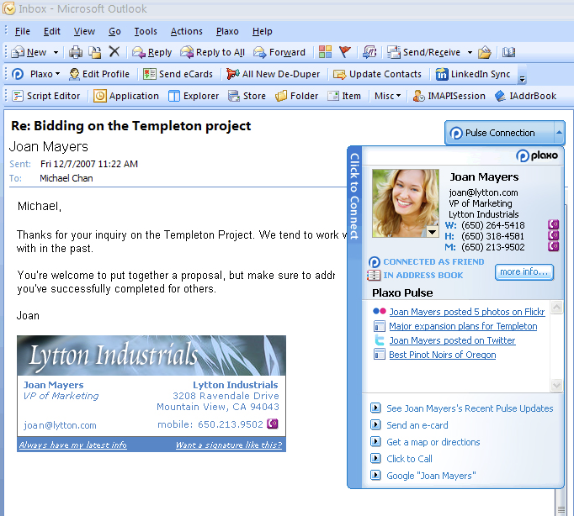