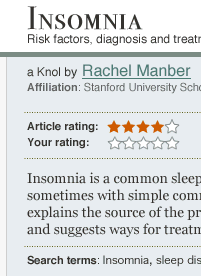 Google is working on a product called “Knol” — a sort of competitor to online, nonprofit encyclopedia Wikipedia.

While Wikipedia lets anyone edit its articles, Google’s Knol is encouraging “people who know a particular subject to write an authoritative article about it” (official announcement here).

So why is Google doing this? Well, Wikipedia has posed a threat: Wikipedia entries frequently show up as top results in Google searches, redirecting Google searchers to Wikipedia instead of to any other site on the web.

We have no choice but to be skeptical, considering Google’s many so-far-fruitless efforts to challenge incumbent online competitors.

Google’s Knol will place author’s names next to their Knol article pages, which Google thinks will help users make better use of web content. Instead of a collaborative editing process, like what happens on Wikipedia, Knol authors will compete to have the most popular page on a topic. Users will be given the option to grade each page, to help clarify which author is best. (See below; a larger Knol screenshot here.)

Knol is Google-centric at its core. Its pages will be hosted by Google. Authors of Knol pages will be able to run Google ads and get some part of the revenue they generate — Google will get the other part. Google will also offer a Knol-specific search option.

Google will also apparently favor Knol pages over Wikipedia pages: “A knol on a particular topic is meant to be the first thing someone who searches for this topic for the first time will want to read.”

But this seems like a crass, commercial move that will marginalize the hard work of millions of Wikipedia volunteers, and breach the principle of objectivity that Google has more or less followed for delivering search results thus far.

Maybe Knol’s focus on giving individual authors a say will convince experts to contribute? That same idea was implemented awhile back for Google News. “Sources” could respond to news articles about in which they are mentioned. As far as we can tell, these “sources” haven’t used Google’s service.

Knol lets you create a web page, then put your content on it. This is akin to Google Base — remember, Google’s classified ad pages. Many thought it would destroy Craiglist and other online classified sites. It hasn’t.

Then there’s Google Checkout, the online payment system that was supposed to destroy incumbent Paypal. That effort has seen top engineers leave and, from what we hear, is at a stand-still.

If you want deep, even-handed analysis, see what Danny Sullivan has to say. Here’s his conclusion:

In short, at some point search engines cross over a line where they’re providing more information than simple answers or pointing out, which changes them from being a search service. Mahalo’s had a fast evolution along these lines, with some pages that are simply content destinations than search results. What happens when and if the major search engines do the same? Getting that balance of human knowledge, compiled information but still being a pointer is important. If Knol launches, Google’s going to face that challenge square on.