When we wrote about Simplify Media in July, we pointed out the company’s ability to tie together the libraries of iTunes users, allowing them to stream music to their friends or to themselves, when away from their home computer.

The Redwood City, Calif. company has now added support for Winamp, iPhone and iPod Touch. Users can hop onto a WiFi connection with their iPhone, hook up to their home computer and listen to their full collection remotely.

Simplify is interesting because, while iTunes includes native support for streaming, the program restricts sharing to a limited number of authorized computers. The Simplify add-on instead opens your collection to up to 30 other devices on your list, providing full access as long as your computer remains on. 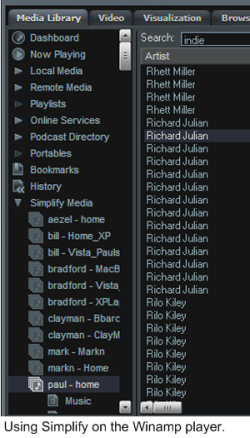 And because it’s built in to other existing applications, Simplify’s app doesn’t require users to learn a new system for sharing. The company’s end-goal is to work across every program, opening up friends’ playlists to each other even when they all have different music players.

While Apple, for one, could build in more streaming abilities, its fragile relationships with music labels will likely prevent it from moving back to a more free-spirited sharing system such as existed on early versions of iTunes.

Nor is Apple likely to add iTunes streaming for the iPhone or iPod, which could be seen as invalidating the different storage limits of the devices. (Why buy an 8 gigabyte iPhone over the 4GB model, when you can stream your full collection from home?)

There are some competitors for Simplify. NuTsie.com, for example, all allow users to upload music to a server and play it back remotely, while Mundu Radio streams music onto your phone. Avvenu, a service allowing remote access to any files on a user’s computer from a mobile phone, was acquired by Nokia about a week ago. And of course, there are always streaming radio services like imeem.

Simplify, which users can download for free, plans to pull in revenue by selling music through affiliate programs linking to the online music stores of Amazon, iTunes and others. “People discover new music using us, but when their friend’s computer turns off, they can’t access it anymore,” co-founder Bill Bradford told us. “There’s a built-in incentive to go buy the music, to have permanent access.”

Although Simplify isn’t disclosing the exact amount of its first funding, Bradford says it was a “modest amount,” between $1 and $5 million. Sierra Ventures was the sole investor. You can check out a video of Simplify being used on the iPhone here.