Ross Levinsohn, the former News Corp. deal-maker who led the acquisition of MySpace, has merged his firm with a controversial Silicon Valley firm to focus on media investments.

We first reported rumors that Levinsohn would team up with the ComVentures in October, and this evening Levinsohn confirmed that news. The merger will be called Velocity Interactive Group.

Levinsohn left News Corp. earlier this year to launch a new firm, Velocity, and his stated goal at the time was to buy up media properties and merge them together in larger entities that were more competitive.

Levinsohn started Velocity with Jonathan Miller, a former chief executive of AOL. The two will team up with three partners at ComVentures: David Britts, Keyur Patel and Roland Van der Meer. There’s no mention of other ComVenture partners, including David Rolnick. If you’ll recall from our story from October, there was a disagreement between Levinsohn and ComVentures’ Rolnick about the nature of the partnership when we asked them about it. At the time, Levinsohn had downplayed the partnership.

While ComVentures had struggled with some of its investments in communications and other sectors, it has focused more lately on media investments. By joining up with Levinsohn, and having offices beyond Silicon Valley — including in Los Angeles, New York and India — it gets to try out a new start.

In a statement this evening, Levinsohn, Miller and the three from ComVentures said they have worked together on a series of investments. The have backed NDTV Networks, a producer of current affairs and entertainment online and TV content , as well as IndiaTV, a Hindi media company featuring nightly news, current affairs and other content. In the U.S., the two sides have invested in Fabrik, an online digital media storage company, Doppelganger, a virtual world company, and Mixercast, a secretive media distribution company.

It’s not clear how much money the merger has on hand. ComVentures has raised several funds previously, and says it has $1.5 billion in assets, however, most of that money is already invested. The team plans to raise more funds in 2008. 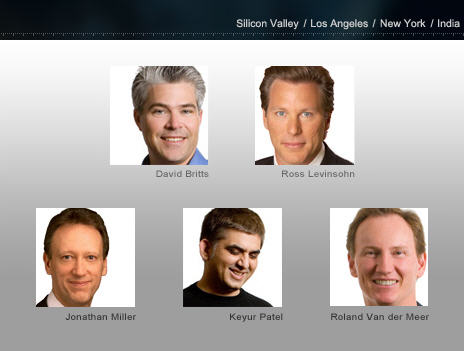