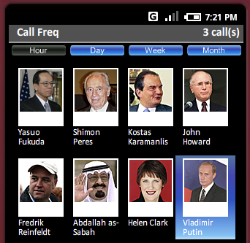 One week after the Google-led Android mobile software platform introduced a way for developers to start building their own applications for it, here’s one that’s already available.

CallFreq gives you an interface in your mobile address book for making calls to the people you talk to the most. Make a call to somebody, then their icon and contact information will show up higher on your list of address book contacts.

The demo of the application currently contains phone numbers and images of politicians and other celebrities. You can try calling any of them through the demo, but the company says that, for now, the call most likely won’t go through. However, you can see the order of each leader changing according to how often you try to call any of them.

The company says that the service should be working soon — “keep trying and you will be rewarded,” it says, with an actual call. It’s not clear if the lack an ability to call is due to a bug on the company’s part, or on Android’s part.

Android (our initial coverage) still has lots of bugs, as the Wall Street Journal reports. The article quotes a few peeved third-party developers who are trying to build Android applications, talking about how they imagined Android’s software development kit (SDK; our coverage) to be more complete.

If you step back, it’s not surprising that a new software platform for a project that’s not even ready is having these problems. If Google lets you into its kitchen while its in the middle of cooking, you might eat something that’s not fully baked. Google’s typical product launch strategy is to release early and ask questions later. This means more bugs, but also a more direct way of testing what works and what doesn’t work, which can prevent strategic mistakes down the road.

For another example of this Googley strategy, look to Open Social, the Google-led social networking platform for third-party developers — it’s also not really ready yet.

In Open Social’s case, third-party developers aren’t waiting around. Even partners like social network like Bebo are working on their own platforms. In fact, Bebo is integrating with Facebook’s own developer platform, so applications can function across both sites.

Like OpenSocial, it’s a good bet that Android will eventually become a great platform for developers.

In the meantime, more Android-related news is slipping out of the kitchen. Yesterday, Gizmodo had an early glance at an Android phone and its mobile operating system interface.

Callfreq is led by founder Yuri Ammosov, a former Russian government policy official who has helped bring foreign investors to the country (his VentureBeat guest column on Russian investing here).