Hulu, the joint venture between NBC Universal and News Corp to compete against YouTube, launched an expanded private testing mode last week. While the TV service, which launched its initial beta version earlier this fall, has won kudos for a clean interface, it faces big questions.

Hulu’s primary problem is that it doesn’t own any of the content on its site and is beholden to its content partners such as NBC and Fox.

Additionally, the same content is also freely available on the networks’ own websites NBC.com and Fox.com. When contacted, a Hulu representative refused to disclose the exact terms of their deals with content providers but claimed that in many cases content will be distributed at the same time on Hulu as it is on the networks. Often, she said, “Hulu will get the exclusive online re-distribution rights for that content”.

As has been noted, the technology and quality side of the offering, at least, is promising. Unlike YouTube, Hulu focuses squarely on professional, network-produced content and has a growing library of hit shows such as “The Office” and perennial favorites like “SNL”. Against initial expectations, Hulu is a well-built service with a clean user interface and a decent seed catalog of content. Hulu’s video player is also embeddable, thereby allowing for viral distribution across the Web. In addition to aggregating content on the destination site, Hulu plans to distribute this content via partner sites such as MySpace, AOL and MSN.

In our opinion, Hulu’s exclusive right to syndicate the content to third party sites is its only competitive advantage. This also means that Fox and NBC cannot take the same content and cut a direct deal with YouTube, in order to get viewers at that popular site. Henry Blodget at Silicon Alley Insider claims Hulu’s exclusivity deal is in place for two years.

Effectively, then, Hulu has a two year window to build out a destination site, achieve distribution through high-traffic partners and viral channels, and most importantly, monetize this content better than the vertical sites or partner sites. Hulu representatives hinted as such and announced that “innovation in the delivery, tracking, and targeting of ad solutions will bring additional value to Hulu’s content providers”. However, since actual details are yet to emerge, we remain skeptical.

If Hulu’s monetization platform fails to reach the return on investment (ROI) expected by the networks within two years, the networks will have a strong incentive to break ranks, cut out the middleman and deal directly with YouTube. On the flip side, if Hulu’s ad platform is truly disruptive and allows the networks to build mass distribution for their content, a credible destination site could emerge. This outcome seems unlikely, however, because Hulu is a late entrant into an already crowded space, doesn’t own any content and is focused on distributing to third-party sites.

It also remains to be seen whether Hulu can return enough money to justify the $100 million investment, made at a reported $1 billion valuation, obtained from Providence Equity Partners (see our previous coverage).

It is also astonishing that Hulu is still not open for public use. According to analytics firm Compete.com, YouTube’s traffic has more than doubled in the last year even as Hulu has taken many months to launch this private test version. Everyday, YouTube traffic continues to grow rapidly, racking up users and exponentially increasing distance from competitors like Hulu. 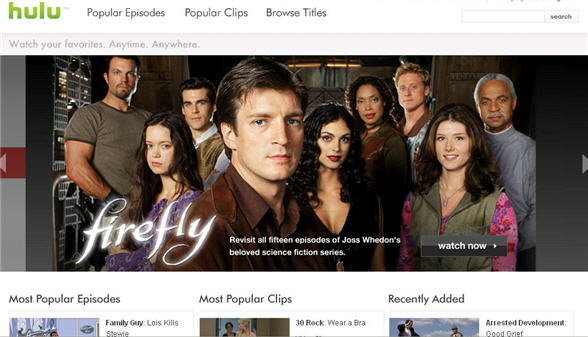