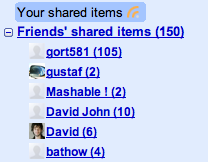 On December 14, Google’s RSS feed reader application, Google Reader, introduced a new way for “friends” to see your “shared” feed items. The feature caused me to blow a fuse, because I realized it was letting competing bloggers automatically see my shared feed items. Google was defining who my friends were, not me.

At the time, a couple of others wondered about the move. But this past week, more fuses have been blowing, as Google Reader users discover that business competitors, politically sensitive relatives, ex-lovers, and others are getting access to items that Google Reader users think they’re sharing with selected confidantes.

The significance is that the “social” data Google has about person-to-person interactions in its applications may not be nearly as valuable as the social data contained in other social networks.

This is where Open Social, its software developer platform for third parties (our coverage), should come in. Google Reader should let you automatically find friends on Myspace, Bebo, Hi5 and other social networks, who are also using Google Reader.  Then you could invite these people in to your friends in Reader. [Note: OpenSocial doesn’t yet offer this functionality to third-party developers, although OpenSocial member LinkedIn’s platform does — or will when it gets up and running (our coverage).] Of course, there are other interesting possibilities, like building a Google Reader application that lives within these social networks, that shows your shared feeds to your friends.

More on that in a minute. First, here’s a specific description of how Reader works.

Before the addition of the “friends” feature, if you marked an item as “shared” you could email it to people via Gmail or post it on a blog. “Shared” items would also be automatically and publicly available at an obscure URL that nobody would ever find unless you specifically told them about it; these URLs were not indexed by Google search.

The new “friends” feature, however, makes this information far more public. If you chat with someone through Gtalk, the Google instant message service embedded in Gmail, Reader assumes that person is your “friend.” Then, within Reader, you and that person automatically get to see each others’ “shared” feed items.

The Google Reader team replied, yesterday, with an official blog post explaining ways you could make shared items private. But that’s not the point.

Here’s the point: Don’t tell me who my friends are, ask me who my friends are — after that, we can talk about what to share publicly or not. As you can see from the screenshot I just took from Reader, below, the team still isn’t getting the memo. Apparently, any competitor who I chat with in Gmail, who then starts using Reader, will still be getting automatic access to my “shared” feeds.

Interestingly, Google has another news-sharing application already available — a third-party Facebook application. Like all Facebook applications, if you want to invite people to use it with you, you need to select individuals who are already your Facebook friends (see screenshot). This is the sort of option I’d like to see, instead of having any chatter recipient “automatically subscribed” to my shared items. 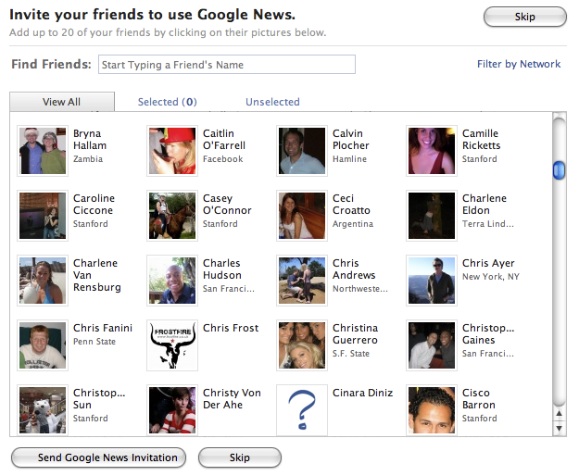 There’s also nothing stopping Reader from using Facebook’s developer platform to access the social data on Facebook from within its own site. Or from building a complementary application for Reader users within Facebook (which this independent developer has already done).

These are suggestions for the Reader team. The key is to ask some sort of permission to share, first. This is how a company builds trust with users and mitigates user backlash when daring new features are released.

Probably the most successful example of that is when Facebook introduced a “news feed” page last year, where you could see all of your Facebook friends’ most recent activity on the site (adding friends, joining groups, etc.). At first, users hated it. They didn’t realize Facebook might give their friends such easy access to see their behavior. But within weeks, everybody realized the news feeds page was a great feature. Why? Everybody had already chosen to be friends with the people who were seeing their activities on the news feeds. In other words, the feature is a great way to get your friends to pay more attention to you — and attention is why many people use Facebook in the first place.

On its face, one can guess why Google isn’t asking you to directly invite other Google users to share feed items with you. Inviting friends is a laborious business, something Google may fear Reader users won’t care to do. After all, many Reader users have already gone through the friending process within social networks like Facebook and Myspace.

Google, you could ask me who my friends are first, then I’ll tell you. Or you could tap into that existing information through OpenSocial. Just don’t assume that you already know everything about me.