The VentureBeat team is mostly taking a much-needed holiday break this week. In the meantime, here’s some of the latest news: 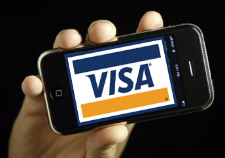 Apple devices to offer payment service? — The company has recently filed a patent for “a wireless system that would allow customers to place an order at a store using a wireless device such as a media player, a wireless personal digital assistant or a cellphone,” Brian Caulfield reports. Phones in other countries, most notably Japan, can already be used to make credit card purchases at stores. Here in the US, we are still looking forward to this feature. (Image via Phone Different.)

Digg tells BusinessWeek that “no acquisitions are in the works” but we’re sticking by our story — Earlier this month, a well-placed source told us that social news site Digg has hired a bank to help it sell itself for $300 million or more. However, companies that are looking to sell usually won’t admit it publicly. Instead, they like to talk about how they’re focused on building a big business. True to form, Digg chief executive Jay Adelson only tells BusinessWeek about a number of new Digg features, and the potential for the company’s international expansion. He also says that Digg’s new advertising deal with Microsoft has been “great” since it started a few months ago.

Amazon Music Store to sell Warner Bros. Music — For some time, we’ve been hearing that Amazon’s music service has been growing quickly, as users are able to purchase songs and albums from it that don’t have restrictive digital rights management (DRM) software in place. DRM software technology is unpopular because it prevent you from buying a song then freely copying it to multiple computers and music-playing devices. Now, Warner Bros. will also sell music without DRM (press release here), following similar moves by EMI and Universal Music Group, who already sell large portions of their music catalogs DRM-free on Amazon. Apple’s iTunes has also begun to sell some DRM-free music — it has a DRM-free partnership with EMI, but not Universal. No word, yet, on whether Warner Bros. will offer DRM-free music through iTunes.

Apple’s iTunes to rent Fox Studios movies — Despite the competition from Amazon, Apple has more plans in the works for iTunes, the Financial Times reports. Apple will let iTunes users “rent” the latest DVD releases from Fox Studios — which means you can pay to download a digital DVD copy of the movie from iTunes for a limited time. Apple already lets you purchase Disney movies (Apple chief executive Steve Jobs is Disney’s largest individual shareholder), as well as a few Paramount titles. Aside from these companies, most studios have, like the record labels, balked at Apple’s efforts to cut deals with them. See the Wall Street Journal for more.
Web analytics service Compete examines Kayak-Sidestep travel site merger — Lots of detail on what Compete says is “among the most significant news items of 2007,” here. Our previous coverage of the deal is here.