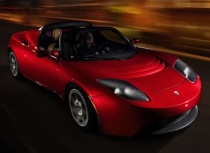 It’s official: Green car madness has taken over. After seeing more electric and hybrid vehicle startups than we could keep track of, we finally decided to start keeping count.

We’ve compiled a list, below, of 27 (update: the list has reached 30; thanks for the comments) startups, listed according to their release date, with additional information on fuel type, range, top speed and price. Most haven’t yet taken venture funding, but where applicable, we’ve listed financial backing.

While we’ve got some overall favorites (Miles, Tesla, Think) and a few favorite oddballs (Aptera, Commuter Cars, Eliica), we’ve for the most part withheld judgement. Still, if you have any of your own predictions about which companies will succeed or — far more likely — fail, we’d encourage you to make them known in the comments.

A note on our method: While most manufacturers are planning more than one model, we chose the one that seemed either most commercially viable or closest to release, depending on our own (discretionary) formula. We didn’t included well-known consumer models like the Toyota Prius or Chevy Volt, or startups like AC Propulsion that only do battery conversions for consumer vehicles. We also rounded the price to the nearest thousand.

All details are taken from the companies, so we haven’t independently confirmed things like range and top speed details. In case we missed any, mention them below and we’ll add them to the list.

American Electric Vehicle — Kurrent
Update: Defunct, according to a comment below, although they seem to still be for sale. We’re looking into it.
AEV advises its potential drivers to “Slow down,” which seems like wise advice, given the golf cart-inspired design. Still, it’s ridiculously cheap.
Fuel type: All-electric
Price: $10K
Range / top speed: 40 miles / 25mph
Release date: Available now

Commuter Cars — Tango T600
The Tango is even odder than three-wheeled designs, in some ways: It’s less than half the width of a normal car, and two can fit in a single lane. It also accelerates like a bat out of hell. Future versions are planned to be much cheaper, and have longer ranges.
Fuel type: All-electric
Price: $108K
Range / top speed: 80 miles / 150mph
Funding: Less than $1 million in angel backing; open to venture funding.
Release date: Available now

Global Electric Motorcars (GEM) — e2
GEM is actually a division of Chrysler, the company has the look and feel (not to mention, apparently, the limited funding) of a startup. Its vehicles resemble golf carts, and are likely used for many of the same functions.
Fuel type: All-electric
Price: $7K
Range / top speed: 35 miles / 25mph
Release date: Available now

Myers Motors — NmG (No more Gas)
Another three-wheeled design, with room for only one passenger. Odd-looking and doesn’t go far, but you can order one today, if you like.
Fuel type: All-electric
Price: $35K
Range / top speed: 30 miles / 75mph
Release date: Available now

Reva — G-Wiz
Despite its distinction as the most-produced electric vehicle around, having been in production since 2001, the Indian-produced Reva isn’t available yet in the United States. It’s considered extremely unsafe at high speeds, so it may never make it over.
Fuel type: All-electric
Price: £8K ($16K in US dollars)
Range / top speed: 70 miles (for 2008 model) / 45mph
Release date: Available now

Twike — The Twike
Some effort seems to have been put towards making this vehicle look like an insect. Of course, the look worked for the Volkswagen Beetle, and it may be working for Twike; the company sold out its 2007 line last year. It’s based in Switzerland, but sells in several other countries, including the United States.
Fuel type: All-electric
Price: $27,500
Range / top speed: 80 miles / 53mph
Release date: Available now

Zap! Electric Cars — Xebra Sedan
Update: While Zap! cars really do exist, the company appears to have made itself out to be much more than it is. Check out the Wired.com expose piece on Zap, and think twice before ordering one (or signing up to be a dealer).
We chose to list the Xebra because the two higher-powered versions Zap is working on, the Zap-X and the Alias, don’t have firm release dates. Zap also has numerous retail locations in the United States, and sells cars made by other manufacturers.
Fuel type: All-electric
Price: $11K
Range / top speed:
Release date: Available now

Spark Electric Vehicles — Comet
Update: Like Zap (see above), it seems Spark is either a scam company or simply incapable of carrying out its plans. Michael Papp, the brain behind Spark, has been arrested and faces trial for taking payments for vehicles he failed to deliver.
Spark has nine models, most made by Fly Bo (listed above). Here, we list the one they designed and manufactured themselves in the United States (most of their vehicles are much slower and cheaper than this one). They distribute their vehicles in Colorado, Michigan, New Jersey and Pennsylvania.
Fuel type: All-electric
Price: $33K
Range / top speed: 200 miles / 90mph
Release date: First half of 2008

Think — City
A pre-existing company whose older cars are still driven in Norway, this European manufacturer will release its new model in Europe this year, and in the United States a year or two after. Business 2.0 had an extensive story on the company.
Fuel type: All-electric
Price: $34K in Norway, $15K – $17K in US (projected)
Range / top speed: 112 miles / 62mph
Funding: Backed by DFJ Element, British Hazel Capital, Canica, Capricorn Investment Group, CG Holding, RockPort Capital Partners and Wintergreen Advisers, as well as various angels.
Release date: First half 2008 in Europe, but not until 2009 or later in the US

Porteon — Porteon
Reportedly to be sold alongside houses in small Mexican communities. Like other companies, this one plans to roll out higher-speed models later, but they haven’t gotten back to us yet with more details, including the official name.
Fuel type: All-electric
Price: $7K – $9K
Range / top speed: TBA / 25mph
Release date: 2008 (month TBA)

Universal Electric Vehicles — Spyder
UEV’s Spyder has a sporty design, but the company itself doesn’t seem as slick and polished as some of the competitors. We’re not sure whether that means anything, though.
Fuel type: All-electric
Price: $70K
Range / top speed: 150 miles / 100+mph
Release date: 2008 (month TBA)

Venture Vehicles — VentureOne e50 / Q100 / EV
We previously suggested that some might call this vehicle a “glorified scooter.” The company does have supporters, though, who gave us plenty of heat — for a chuckle, check out the comment thread below our story. The three models listed are actually one car with different configurations.
Fuel type: Two hybrids, the e50 and Q100, and the all-electric EV
Price: $20K – 25K
Range / top speed: e50, Q100 and EV respectively: 350 miles / 100mph; 300 miles / 120mph; 120 miles / 75mph
Backing: Backed by NGEN Partners.
Release date: Second quarter 2009

We’ve picked out a few companies that represent next-generation thinking in EVs. As noted below, there are many more.

Velozzi
An X-Prize contestant, Velozzi is most notable for claiming that their car will have a 0-60mph acceleration of under 3 seconds. Other details are pretty thin, though.
Fuel type: Hybrid
Price: TBA
Range / top speed: TBA / 200mph

Wrightspeed — X-1
Wrightspeed admits that its scarily fast prototype is unsafe, and will never be mass-produced. The company is planning a commercial model with the same high performance, but hasn’t given any real details yet.
Fuel type: All-electric
Price: Probably high
Range / top speed: <100 miles / 112mph w/ electronic limiter (but it’s still in first gear when it hits that speed)

There’s also the Automotive X-Prize competitor list, which had grown to 45 teams at last count — a few of which are included on this list, but many not. Most are concept cars.