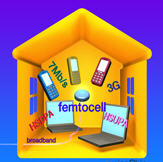 Airwalk Communications is part of a wave of companies developing “femtocell” technology, which lets your cell phone run on your home WiFi networks (update: the company only works on CDMA networks, not WiFi), and allows you to route calls over your land-line too. The Richardson, Texas company has just finished raising $25 million in a second round of financing.

Deploying femtocell access points is expected to be a major trend this year and next. Airwalk faces competition from a range of players, including Ubiquisys, based in Swindon, UK, and backed by Google, among others.

Others competitors include RadioFrame Network and Airvana, not to mention large companies Alcatel-Lucent, Sony Ericsson and Samsung. Airwalk hopes to go to market in early 2009.

Airwalk has now raised $33 million in total. The latest round was led by Sevin Rosen Funds. Other investors include Alta Berkeley Venture Partners, Duchossois Technology Partners and TL Ventures.

Here’s our earlier coverage of Ubiquisys, which has now raised $37 million.

Femtocell technology is just one of the alternatives to fixed-mobile convergence, a trend toward a world where you can call over both your fixed or cell line, whatever is cheaper. Most competing technologies, however, require a new (dual-mode) handset, whereas Femtocell doesn’t. It can be used with existing devices (cellphone) and operate on local home networks, and be hooked up with the home’s land-lines or through VoIP. Carriers would sell the technology to consumers, pitching it as a way they can lower mobile subscription costs. Sprint already is testing femtocell in some areas. The femtocell technology also promises to improve transmission of IPTV and high-bandwidth services.