The two firms have invested in a $42.4 million second round of capital for the company, VentureBeat has learned. The company could not be reached for comment. A partner at Benchmark was reached, but he declined comment. [Update: Benchmark followed up Tuesday confirming the news.] This follows a $15 million investment two years ago. Besides Benchmark, the earlier investors also include Millennium Technology Ventures and Omidyar Network.

The investment is considerable, and comes at a time when a number of experts are betting that a more powerful, “semantic” Web is about to emerge, where data about information is much more structured than it is today. People are still waiting for the “killer app” that will exploit this new sort of web, but it’s generally believed that a database such as Freebase or Twine will be needed for this to happen.

[Update: I should clarify: Twine is not so much a database as it is an application. But the linking of data — through relationships — is similar, and thus the easy confusion. Conceivably, Twine could use the Freebase database, and is thus complimentary. See comments below. Twine’s Nova Spivack says it best: “Twine is more like a semantic Facebook, and Metaweb is more like a semantic Wikipedia.” Metaweb is a content repository and Twine is an app that uses content for specific purposes.]

Both Freebase and Twine have drawn considerable hype (see coverage when Freebase was announced last year). Freebase is essentially building a Wikipedia-like database, but with much more power. While volunteers are madly writing up entries on Wikipedia — and very good one at that — there’s no system on Wikipedia that can tell the functional relationship between two related pages — i.e., something telling it “here are all the entries about males who are good-looking and who write about technology.” Freebase has the ability to do that.

Here’s a video tour of how it works. Freebase categorizes knowledge according to thousands of “types” of information, such as film, director or city. Those are the highest order of categorization. Then underneath those types you have “topics,” which are individual examples of the types — such as Annie Hall and Woody Allen. It boasts two million topics to date. This lets Freebase represent information in a structured way, to support queries from web developers wanting to build applications around them. It also solicits people to contribute their knowledge to the database, governed by a community of editors. It offers a Creative Commons license so that it can be used to power applications, on an open API.

Search is an example of an application it can make more powerful. See the screenshots below, which show you the example of a search at Freebase for the word Manhattan. Freebase lets you further specify that you’re looking for a film, as opposed to a location, and it rearranges the results accordingly — something you can’t do with Google.

Freebase “knows” Woody Allen is an director, and then knows other directors. It also knows Allen’s place of birth, and it can take you to that city, where you can find other people born there, and so on. Everything is connected.

MetaWeb is run by Thomas Layton (pictured here), who became CEO last year, after he left another Benchmark company, OpenTable. 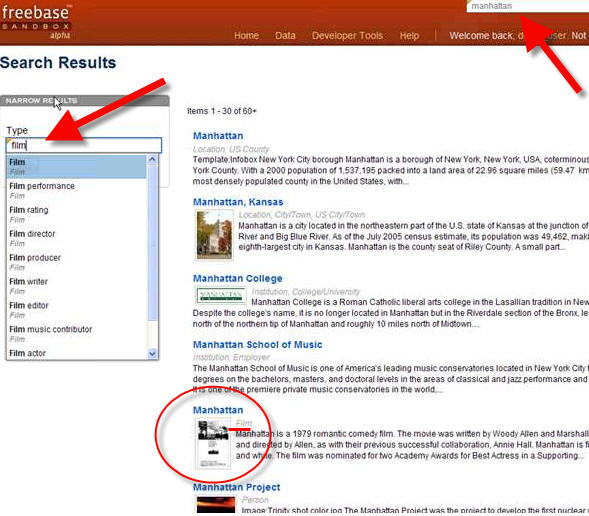 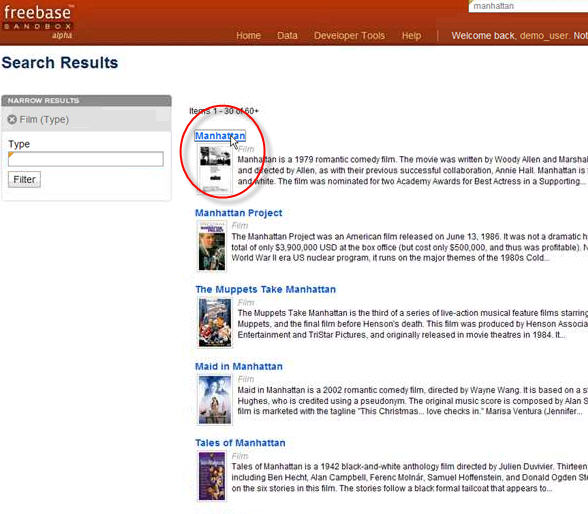 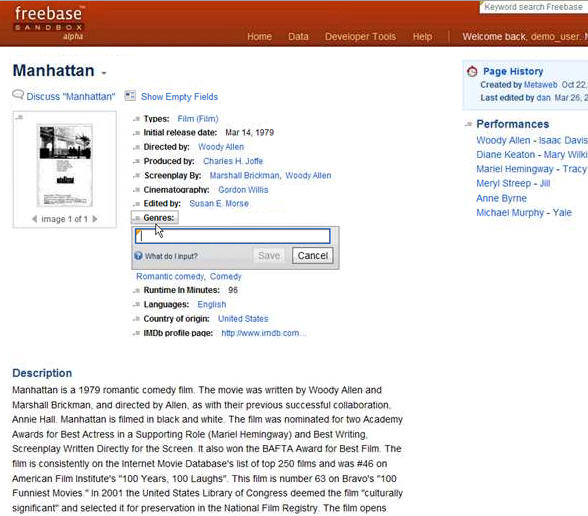