We all know it. Most third-party applications on Facebook are pointless and people are increasingly ignoring them. Take a look at this list of top Facebook applications. Across the board, these applications — including Slide’s Funwall and RockYou’s Superwall — have shown sharp drops in their numbers of daily users since last November and December.

Facebook users are simply expecting more out of their applications, and a new wave is gaining popularity. These application are often built by companies that have found success elsewhere and are just now trying their hands on Facebook. Interestingly, a key strategy appears to be tying Facebook into other place where users already are — other sites as well as mobile devices.

One of the most interesting examples of this new wave is Flirtable, a dating application built by San Mateo, Calif.-based SMS games company Frengo (our previous coverage). It’s a Facebook application that also offers SMS and its own mobile web site, to give you a ubiquitous flirting experience that’s tied into Facebook — in contrast to mobile offerings from dating sites like Match.com, that lack any social context beyond Match.com. 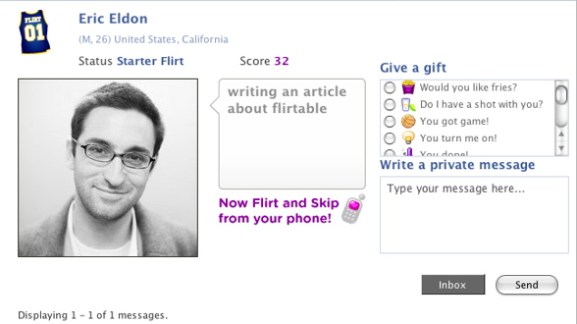 Flirtable is basically a simple game. You see the profile pics of other Flirtable users, you vote them a “flirt” if you want if you want to talk to them, then you send them a flirty message or virtual gift (virtual flowers, for example). You earn points by voting, messaging, inviting your friends and getting voted “most flirtable.” The more points you earn, the more likely you are to show up as a top Flirter on the application’s homepage — meaning ever more flirting exposure for you. You can send SMS text messages if you prefer, that includes links that take you to the Flirtable mobile site.

The application has 3.2 million total users, having grown quickly since it was launched in November. Today it has more than 350,000 daily active users. It gets 12 million daily pageviews, according to Frengo chief executive Mahi de Silva, with more than 600,000 messages and gifts being sent and between 10,000 to 15,000 users signing up per day.

Frengo also knows how to monetize — a big question for any Facebook app developer, many of whom make money only through advertising other applications. Frengo already makes money on its own site, through selling monthly subscriptions to people who want to play Frengo games on their phones. And, aside from Flirtable, it is working with a range of other Facebook application companies, launching mobile versions of these applications that include revenue-generating options.

For example, it built a mobile version of RockYou application Horoscope. It offers a way for you to get your horoscope from the application sent straight to your phone. You can get it sent three times a week for free, or pay $5.99 to get it every day. You can put the bill straight onto your cell phone, which is great for teenagers who don’t have a credit card but do have a cell phone that their parents pay for (Note: RockYou chief technology officer Jia Shen highlighted this type of monetization strategy to me last October, before RockYou started working with Frengo). Around five percent of Horoscope users pay for this service, de Silva tells me.

I’ve noted other companies that have successfully bridged social networks like Facebook with other sites, both to get traffic and dollars. Take a look at Gaia Online, a virtual world that is already making millions by selling virtual goods to its teenage audience (virtual hats for a user’s avatar, for example). Last month, Gaia released an application for social network Bebo, called Gaia OMG, using Bebo’s developer platform (which is essentially a licensed version of Facebook’s platform). Gaia OMG features a simplified version of Gaia’s home site, and has also sent significant traffic back to it — users, among other things, need to buy their virtual goods for Gaia OMG on the Gaia home site (for more, see our previous coverage). Gaia has also just recently released a Gaia OMG application for Facebook.

Flirtable, meanwhile, is free for now, although it includes advertising — de Silva wants to see it take more market share from Match.com and other dating sites before trying to charge for anything. Meanwhile, he says he is being approached by major consumer brands about new methods of advertising within Flirtable, such as being able to send real-world flowers to people you flirt with, not just virtual flowers.