Coskata, a next-generation ethanol startup, has come back up in the news again with an announcement that it’s partnering with ICM to design and build a commercial-scale ethanol plant.

We covered Coskata less than a month ago when it received a strategic investment from General Motors. Reaching another major partnership so quickly is remarkable, and indicates that large, established companies see promise in Coskata’s technology as a more efficient competitor to cellulosic ethanol companies like Range Fuels (coverage here).

For those not familiar with ICM, it’s a company that has its hand in the development of the majority of the ethanol plants around the country, providing equipment like dryers and bio-methanators as well as engineering services. It does well even when ethanol doesn’t because it’s focused more on construction, which is typically booming.

However, to keep ahead of the curve, ICM needs to make itself central to the next generation of ethanol production, including cellulosic ethanol technologies and others like Coskata. It also recently received some Federal funding toward building a small cellulosic ethanol plant in Missouri.

Coskata itself relies on a gasification technique that produces a syngas later converted by bacteria to ethanol (see diagram at bottom). The aim is to produce For more on different methods, see our recent post on Zeachem.

Based on the company’s previous announcements, the plant is intended to produce between 50 and 100 million gallons per year, which is about the average range for current corn ethanol plants. It remains to be seen whether the project can be financed entirely from existing funds and partnerships or if Coskata will tap into the usual mix of private equity and debt. We doubt it will have much trouble convincing more investors, though.

Update: Coskata’s VP of business development has gotten back to us. He says the company may go with traditional fundraising, but doesn’t see that as the best solution. Instead, they’re considering working through partnerships to let larger companies build the plants and simply provide the technology — in effect, a licensing scheme. That, he says, is a better approach to “rapid commercialization”.

The company is shooting for a late 2010 completion date for construction. 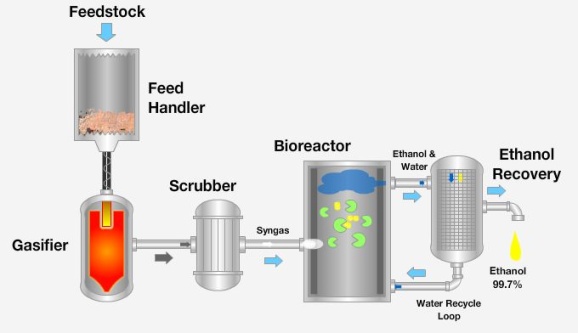