MTV is using Flixwagon’s mobile-to-web broadcasting platform for its “Street Team” of youth journalists covering the primaries from 23 different states. The live broadcasts will be available on ChooseorLose.com and MTVnews.com, while MTV will periodically run edited snippets on its TV channel.

The citizen journalists, backed by MTV through a $700,000 grant from Knight News Challenge, are using Nokia’s N95 devices, the super-mobile phones that feature a 5 megapixel camera and the ability to create, edit, and upload stories directly to the internet. 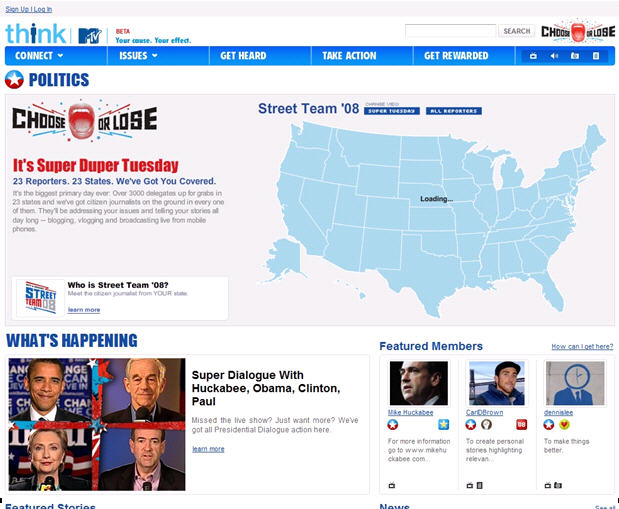 Eran Hess, CEO and co-founder of My Frame Inc, the company behind FlixWagon says mobile streaming video has seen limited uptake so far in the U.S. and so building a mass market has been difficult. Bandwidth tends to be slow in the U.S. on the 3G network, he says, where speed is often determined by where you are. In Europe, he says, the company is experiencing “very high speeds.”

Another limiting factor is the fact that only higher-end Nokia and Sony Ericsson phones will support FlixWagon’s functionality — only phones with Symbian technology. The difficulty with providing FlixWagon on every internet-enabled mobile phone has to do with the J2ME technology on many phones, says Hess, because each phone with that software operates differently.

While Hess wouldn’t disclose any financial data on FlixWagon, he did say the company intends to draw revenue not only from its consumer service but also by partnering with content channels (such as MTV).

The mobile-broadcasting market isn’t crowded by any means yet, but it is certainly going to get heated up as bandwidth increases, more people switch to data plans, and new technologies are released.

Flixwagon has offices in Boston, Mass. and Tel-Aviv, Israel. Hess says that Flixwagon is currently in negotiation with a “major VC” for a second round of funding.