A stealthy Georgia-based startup with plans to manufacture silicon-based solar cells unveiled itself this morning, announcing a hefty $50 million financing that will help it start production.

The company, called Suniva, says its cells operate at about 18 percent efficiency, near 50 percent better than the average cell produced today. CEO John Baumstark told us that there is a “clear roadmap” to boosting their efficiency over 20 percent within a year or two. Just as importantly, they are designed to be cheap.

The company is a spin-off of Georgia Tech’s Center for Excellence in Photovoltaics, a research group founded in 1992 by the university. The company is a little more than a year old, and has technology licensed from the Center and has its director, Dr. Ajeet Rohatgi, as its chief technical officer. 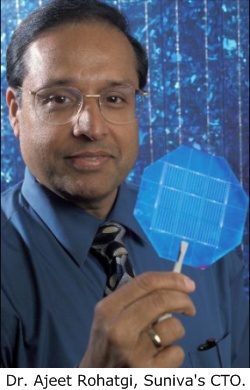 Using established manufacturing techniques including screen printing, Suniva expects to be producing cells for under $1 per watt within two to three years. If true, that would make Suniva’s cells some of the most cost-effective photovoltaics available.

The new funding is planned to go towards a 25 megawatt per year production facility located near Atlanta, Georgia, the company’s homebase. Baumstark said in an interview that the production line would be highly automated, requiring a total of about 40 staff members for round-the-clock production.

If it meets its initial cost targets, this first factory can be scaled up to higher production, although the company is also considering opening facilities in other states depending on the incentives offered. However, plans have yet to be finalized even for the first factory.

The funding is Suniva’s second, and was co-led by New Enterprise Associates and Advanced Equities. Goldman Sachs participated though Cogentrix Energy, alongside HIG Ventures and Quercus Investments. The company previously took $5.5 million in mid-2007 from NEA, HIG and Quercus.