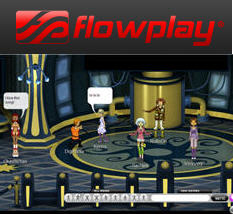 FlowPlay, a Seattle company developing a virtual world for teenagers and young adults around casual gaming, has raised $3.7 million in a first round of funding led by Intel Capital and Ambient Sound Investments.

John Cook, of Seattle PI has the news.

The company, run by former general manager of mobile games at RealNetworks, Derrick Morton, is still in testing mode, and apparently plans to launch in spring.

Morton said gaming integration with a social network took resources, and so the fundraising took a while because investors were concerned about the money it would take to launch, according to Cook. Flowplay plans to charge $5.99 per month, aiming for 80,000 users to break even.

That’s the same model ($5 per month) as Club Penguin, which sold to Walt Disney last year for as much as $700 million.

We covered Flowplay during the Techcrunch40 conference, and concluded that while the site looks clean, there wasn’t a whole lot new here (there are lots of games where you can play with Avatars). That doesn’t mean it won’t get users, however, as the sector in general has seen strong growth.