Editor’s note: This is an OpEd piece from Richard Wong, venture capitalist at Accel partners who specializes in mobile investments. We asked him for some notes about what is happening at the major mobile conference going on in Barcelona.

It’s February again, when leaders in mobile, internet and the media converge on Barcelona for its annual conference. More than 50,000 attendees from just about every mobile company in the world are crowding into Barcelona’s Fira Montjuic grounds for the annual five-day event.

This year, the event was renamed from 3GSM World Congress, to a more politically correct, “Mobile World Congress” with a nod to expand the tent to include the CDMA mobile community (e.g. Qualcomm et al), and the emerging 4G technologies now in early deployment.

An Industry In Transition — – End of the Operator Era?

In my view, the dominant theme this year is a fascinating industry major transition, and search for a new center-of-gravity. Historically, the MWC conference has centered around the mobile operators, as they have played their position as kings of the mobile industry: The industry players, and other vendors would line up to try to show their wares to any operator executive who would listen.

This year feels distinctly different. The operators are losing their status as the kingmakers – they no longer have dominant control of which technologies, services, and handsets consumers will see. Internet giants such as Google, Apple, Yahoo, Microsoft, along with Nokia, and the other top handset makers, are all banging at the gate to end the operator-dominated era. Most players in the mobile are now looking for ways to work around the mobile operators, or find marketing strategies going directly to the consumer, bypassing the operator. This battle between operators and the open mobile, off-deck world, will remain they key theme in mobile for the next 3-5 years.

A Few Highlights From The Conference – Day 1:

Open OS wars – – Open OS handsets, such as Symbian, Windows Mobile, and Palm have grown, slowly but steadily over the past 10 years. 2007 saw an acceleration with Nokia pushing the N-series high-end, in response to the iPhone and presumed Google Android threat. Today, Microsoft and Sony-Ericsson announced a groundbreaking partnership to build higher-end devices using the Microsoft OS operating system. This represents a major strategy change for Sony, which has historically used Symbian. The first phone, the Xperia1 was announced today, and is depicted here: The move is significant because, historically most handset players have been cool to Microsoft, fearing the same commoditization that PC manufacturers faced in the 90s. Could it be that the fear of Microsoft has now been replaced by a greater fear of iPhone and Android?

Where’s Android? – Rumors have Google exposing its first Android prototypes here at Barcelona, but as yet, Google and the Open Handset Alliance are downplaying the announcement. It will probably be at least one more MWC before we start to see Android phones in substantive volume. In my view, given the long cycles required to get new phones to market, the growth of Nokia N-Series, Symbian, and Windows Mobile phones will have greater impact than Android in the next 1-2 years. (Update: ARM does have a development platform shell, only, on display at the show, just a sample of what’s possible with the OHA, but not available other than for mobile developers) 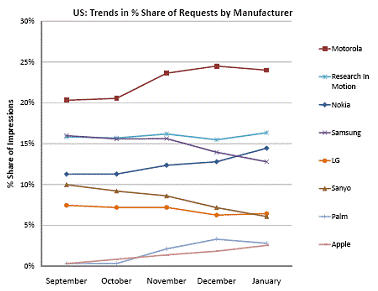 Mobile Advertising growth – Much has been written about growth in mobile advertising, this past year, but it appears the volumes are starting to become meaningful. Admob (disclosure: one of my firm Accel’s investments), today at the show announced their January mobile ad statistics, showing almost 2.4 billion impressions served in January, up roughly six-fold since January last year. While iPhone remains at the bottom of the chart below, it looks like ads served on it should reach about five percent of ad impressions by Spring 08, far above the percentage of phones shipped. Expect to see Nokia/Enpocket, AdInfuse, Amobee, Medio, and other mobile ad startups also highlighting their mobile ad offerings and statistics throughout the show.

The 4G Cycle begins – While the mobile operators have just finished the buildout of their 3G networks, the cycle begins again with the evaluation and early deployments of 4G technology. This Mobile Congress will begin a hard-fought battle between competing protocols for next generation network buildout. WiMax is heavily backed by Intel, and the technology been deployed at operators such as Sprint’s XOHM. The traditional network equipment incumbents (Siemens-Nokia, Alcatel, etc)t are backing a protocol called LTE (long-term evolution), which extends from the existing 3G platforms. Interestingly, the industry association, GSMA, has thrown its support behind the LTE standard. Look for announcements with new performance claims, and early announcements on chipset and handset availability throughout the show (see coverage here and here).

The Nokia Services strategy –- Throughout 2007, Nokia has been very active in pushing to add a services strategy, and breakout from its handset dependency. The acquisition of mobile ad player, Enpocket, and the widely covered Navteq acquisition were tangible moves in this direction. Today, Nokia continued its push towards services, by announcing a number of new services, including a “Maps 2.0” offering. This appears to be the beginning of integrating Navteq data into Nokia services and handsets. The announcement also suggests Nokia will roll this into their mass-market Series 40 line of handsets, expanding the reach of this integrated navigation service. Nokia has long been suspicious of internet/PC industry players such as Microsoft, and appears serious about this new services strategy. If this succeeds, they will be an important force in the off-deck economy, and a important new kingmaker in the industry.