Overlay.tv today launched a video-commerce platform that may give marketers a new way to monetize on online video.

Even online video mammoth Google/YouTube hasn’t successfully implemented a way to extract revenue from its billions of user generated videos. A number of sites have taken to inserting “pre-roll” ads into the videos they offer — ads that viewers are forced to sit through prior to watching the featured content. But the big video sites haven’t adopted pre-roll ads, and for good reason: They don’t work, and neither have contextual banner ads so far.

Enter Overlay.tv. The Toronto, Canada-based company offers a destination where marketers and users can place “overlays” of content onto videos streamed from more than 20 online video sites, including YouTube, metacafe, videojug, and others (it streams the video and doesn’t actually store it on its servers for copyright reasons). Marketers and users using the platform can then overlay selected videos with pictures, words and graphics that link to products or information on external websites.

So take a video clip of, say, Fashion Week in New York City. A marketer could link a certain shoe or dress in the video to a purchase point to buy the item. It can then embed this overlaid video in blogs, websites, and MySpace profiles. Overlay.tv has also launched a Facebook application that lets users access its platform directly from Facebook.

And unlike pre-roll ads, viewers can opt out of these overlay ads if they choose to, the company says.

In one example you can link to here, you’ll see a video clip called “How to Be the Perfect Boyfriend.” Overlays in the video link viewers to how-to books, flowers.com and other relevant vendor sites. 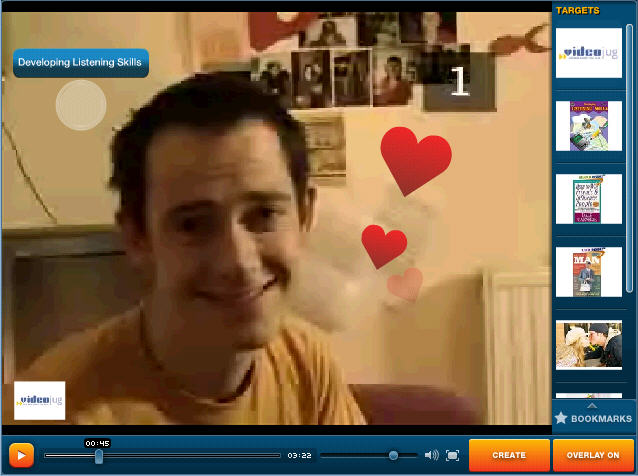 Overlay.tv generates revenue from its more than 600 affiliate partners, including Amazon, iTunes, and Walmart, through cost-per-action and cost-per-click at about 5 to 12 percent revenue of what the merchant makes on merchandise sold through click-throughs. Overlay’s users also get a share in the revenues. The company says it distributes anywhere from 25 to 50 percent of this form of revenue to its users.

Overlay.tv also plans to generate revenue through partnerships with online video destinations as well as media companies, such as record labels. It’s currently at the contract stage with a major company in the online video space and a major record label interested in licensing the Overlay platform, although CEO Rob Lane wouldn’t name the two companies. The companies would theoretically integrate Overlay’s platform into their sites, so that users and marketers would have the same ability to link advertisements directly to the video.

The majority of online advertising is focused on professionally produced content, Lane says, while no one has successfully advertised through user-generated content. To illustrate his point, he gives an example of a user watching a mountain biking clip. This user may not be interested in a toothpaste ad because it’s irrelevant to mountain biking, but he or she may want to know the exact make and model as well as the cost of the bike used in the video. The only way to market effectively is to bring the user in, Lane says.

Many big brands would like to advertise through user-generated content, but they don’t know how, he says. The Overlay platform could also help marketers find out how effective a product placement is in a video by tracking the analytics Overlay provides.