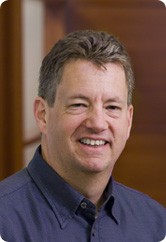 Bill Ericson doesn’t see much cause for pessimism about the dawning Genomic Age. The Mohr Davidow Ventures partner, who’s helped resuscitate the firm’s life-science practice since he came aboard in 2000, believes the widespread dissemination of genetic information will be a virtually unalloyed good, opening up a wealth of opportunities for more effective medicine, lower healthcare costs and individual empowerment — not to mention investment opportunities for those prescient enough to seize them. (See here and here for my own take on the subject.)

Ericson, of course, has plunked down some serious cash in service of his convictions. He played a significant role in funding the genome-sequencing startup Pacific Biosciences, which announced itself with a splash last weekend, and previously backed Tethys Bioscience, a biotech with a test it says will predict your diabetes risk with high precision. I spoke with him recently about the PacBio investment, and somewhat to my surprise soon found myself in a broader conversation about the impact genomic data will have on the world. (I’ve edited the transcript for clarity and brevity.)

VentureBeat Life Sciences: Makers of biological tools like gene-sequencing equipment have been out of favor with VCs for almost a decade. How did you get involved with a genome sequencer like PacBio?

Bill Ericson: Back in the mid-1990s, it became clear that we were entering a period in which we could measure biological functions and patterns in ways that we hadn’t previously been able to do. When I joined Mohr Davidow, I wanted to focus on where measuring biology in more systematic, quantitative ways would lead. It was just the beginning of a period of rapid technological advances and of rapidly improving understanding of fundamental biology. I was convinced that all sorts of goods and services would flow out of that.

One area we considered greatly underinvested was sequencing. Other nucleic-acid measurement techniques are surrogates for sequence information, which we thought was the gold standard. At the end of the day, if you could do fast, accurate sequencing, you’d probably end up dominating the field.

One technology that got us really excited was at a company then called Nanofluidics [now PacBio], where three Cornell postdocs were working on zero-mode waveguides and using them to do sequencing. We convinced them to move their group to the Palo Alto area, where they incubated with us for the better part of a year. We wanted to invest in people and technology that could really take you to the next, next level of sequencing — as close as possible to the end state of sequencing technology. These guys had at least the theoretical ability to do the full human genome for $1,000 or less.

VBLS: What consequences do you expect from the advent of such high-speed sequencing?

BE: This is an information-generating technology, one that’s faster, cheaper and more powerful than anything else. Any number of new applications could flow from that. For instance, everyone believes that genetics plays a role in predisposing you to various diseases. If we do the population studies [that reliably link genetic differences to disease], you can arm physicians, patients and consumers with a better way of looking at health. Human health turns into much more of an information system that can be understood and proactively addressed, in sharp contrast to medical practice today, which is tremendously reactive and wasteful.

Once you shine the spotlight of sequencing on large populations, you’ll identify patterns that are invisible today. I would love to see genetic studies show that only five percent of the population actually needs to go on a drug that today is prescribed for 40 percent to 50 percent. That’s a tremendous win — no drug has no side effects. Sequencing could also be very useful in an area that frankly ought to scare all of us to death, which is the emergence of drug-resistant infectious disease. You could see the mutations [that confer resistance] happening in real time. In real time, you could be measuring somatic mutations [that give rise to cancer].

I think all these tools are going to give rise to new applications. It’s a lot like watching the computer industry — once PCs were adopted to the point of being cheap and readily available, people created applications for them. I honestly wish I could tell you precisely what will be valuable and what won’t, but we’re still in the early innings.

(More after the jump.)

VBLS: What about the potential downsides, such as genetic discrimination that could leave many people uninsurable, or even the possibility that society could end up stratified by genetic caste, as in the movie Gattaca?

BE: I worried a lot about those negative implications when we started investing, but American society is, I think, mature enough to deal with the information, whether by legislation or via general social norms. Insurance, for instance, we’ll probably manage through legislative approaches. There’ll be occasional flareups as insurers try not to insure individuals because of their genetics, but I think it’s not going to work.

On the privacy front, I think the issues are generally overblown. We live in a world where every bank account is available online. If someone gets into my bank account, it’s gone. If someone takes my genetic information, what are they going to do with it? Maybe post it on the Web to show people I have a predilection for Alzheimer’s disease? There’s more concern than there needs to be. When you drill down and ask what people are really going to do with the data, I think it’s overblown.

VBLS: What about insurance discrimination? Or, conversely, the possibility that strong genetic-privacy laws might make insurance companies vulnerable to adverse selection?

BE: Because insurance is run on an actuarial basis, I think that risk will be reflected in pricing over time. One unfortunate outcome is that people more likely to get sick will cost insurers more. I would hope there’ll be a compensating decrease in healthcare costs associated with insuring people who shouldn’t be insured. It’s the net dollars in and out of the system where that becomes an issue.

My bigger concern about the cost of the healthcare system today is the fact that it’s so reactive, not proactive. Things that should be managed early in the course of disease don’t get picked up until later. I’d like to see the policy dynamic tilted toward predictive and preventive medicine, and these tools should play a role in that. Take the Tethys test — if you can predict that someone will get diabetes five years in advance, you can change behavior. If you only say someone is at risk, I don’t think people will ever change their behavior.

So my big concerns are less about the negative consequences of genomics than about the positive consequences of putting these sorts of early-warning systems in every doctor’s office. When you talk to physicians, they’ll tell you the tools they have are so imprecise. Go to the doctor today and they might tell you your BMI is over 25, which puts you at an elevated risk of diabetes and possible heart disease. Why can’t they tell you, “We looked at the biology, and based on what the biology is doing, you’re well on the path to diabetes, and if you don’t intervene today, you’re going to be a diabetic?”

Similarly, many patients taking certain widely prescribed blockbuster drugs get no benefit. A great Business Week article last week encapsulated the case against [cholesterol-lowering] statins. [Among other things, the article notes that for every 100 people taking statins, only one will be spared a fatal heart attack — one of the lowest risk-reward ratios in modern medicine. –D.P.H.] The whole statin industry is built up on very cursory information — the evidence that lowering cholesterol with statins will reduce your chances of dying from a heart attack is very weak at best. A better understanding of the underlying genomics would let doctors specifically treat patients with the greatest genetic risk of heart attack, instead of just giving statins to everyone with high cholesterol.

I think all these things require more and better measurement, to get inside the biology and really understand what’s going on. I don’t think it’s a short path — we’re not going to wake up in two years and say, “Now we understand it all.” Right now, though, doctors make a lot of suppositions without having a lot of data. There are things we need to measure much better.