I’ve updated this story, given that I was attacked for not digging enough. See update here.

Just six months ago, things weren’t looking great for Like, a Silicon Valley company that offers visual search for shopping.

But suddenly, over four months, the company has tapped a robust number of users, and it now expects to earn more than $10 million in revenue this year. It’s all driven by a steady refining of the site’s features. Now customers click through on items at a rate as high as 90 percent, compared to a year ago, when they clicked through 16 percent of the time, says chief executive Munjal Shah. Tonight, the company put the finishing touches on a new release.

Shah says visual shopping search is more viable than social shopping search, which offers a way to share what you are buying with friends. The reason, Shah says, is that shopping is a more solitary activity than people may realize. “We’re killing them,” he says, of social search engines — this includes ThisNext, for example. [Update: Fred Wilson calls me on this, saying the traffic trend isn’t clear. The Comscore chart below shows that the two sites are both growing last year. But look at the hockey stick growth of Like in December. Shah’s argument rests on Like.com’s traffic since that time, i.e. through December, January and Feb. ThisNext’s traffic didn’t go anywhere in December, which is supposed to be a huge month for shopping. But it’s true, we haven’t seen ThisNext’s traffic since then, so it’s too early to fully test Shah’s claims. Update II: I forgot to point out that, while Fred focuses on traffic, the more significant point Shah is trying to make goes beyond traffic: Like is getting superior click-throughs and revenue generation. He showed me internal stats for both traffic and revenue. I’m checking with ThisNext to see what they will share.]

Earlier, VentureBeat reported Like.com had raised $3.3m more in financing, and that it is now getting 3 million monthly unique visitors.

Like lets you search for shoes, bag and jewelry by typing in terms related to their visual characteristics. Here’s how Like works: It converts your search term, say “red snappy shoes” into a visual search for only shoes that are red and snappy (try typing that into other search engines, such as Shopping.com, and you’ll get many other types of shoes in search results, many of them not red, and not snappy).

Like is being helped by other companies, such as Zappos, which take the risk out of buying things online. Zappos, for example, offers free delivery of purchases for shoes, and lets you return shoes if they don’t fit. This gives people more incentive to buy online, and they’re using Like.com to search for styles and colors before buying, Shah says. Once a person selects a shoe, Like.com lets them buy it from Zappos if it’s in stock.

Like will soon offer a way to search for certain materials/textures as well. It’s refining a way to return the trendiest items on the top of its results, in consultation with fashion experts about what color palettes and silhouettes are “in” at any given time.

It will fine-tune other features in coming months, some of which are being introduced now but aren’t perfect. For example, it will let you find accessories and other items that match products you’re searching for. But it will do things like recommend polka dotted shoes when buying a polka dotted dress — not necessarily the greatest match. But Shah says the point is to deliver and then incorporate feedback. The site is looking much better than the last time we looked at it, here.

See update to this story here. 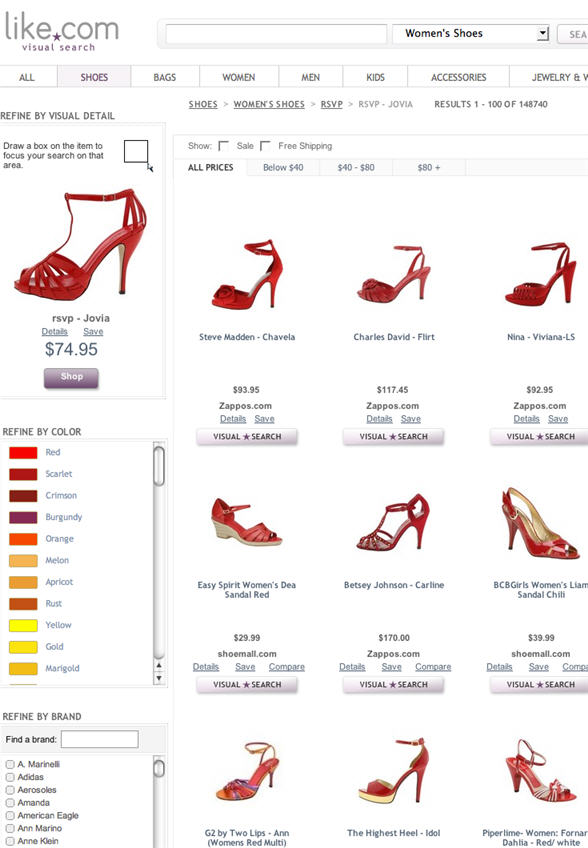