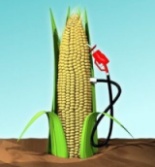 If you were following the breathless headlines a few days ago, you now know that new biofuel production (i.e. more farms) from some feedstocks, including corn, likely causes more global warming than if we continued to use fossil fuels.

A pair of of Princeton researchers found that corn-based ethanol doubles greenhouse gas emissions on a 30-year timeline, and increases overall levels for 167 years. Worse, converting land currently used for corn to switchgrass (a popular feedstock for cellulosic ethanol) will increase CO2 emissions by 50 percent, according to the report, summarized here by ABC News.

Soon after came the rejoinder from biofuel advocates, who picked apart certain assumptions of the study and said, in summary, that conclusions based on “speculative, limited land use change modeling” are likely to misguide future policy on the issues.

In short, the authors — two Department of Energy researchers — think the study doesn’t do biofuels justice. Unfortunately, we’re probably several years away from one that does. A comprehensive picture of the impact crops (like corn, switchgrass or sugars) have on the environment will be a massive undertaking, and will require the consensus of dozens of experts before anyone puts any real credence in it.

Meanwhile, investors might begin worrying about shifts in policy and public opinion affecting their businesses. People are gradually becoming aware that the high hopes (and cash) the Bush administration has invested in corn-based ethanol are driven more by farming interests than science or good judgment. A policy backlash in the form of reduced or unreliable subsidies could also cut into biodiesel, cellulosic ethanol and other biofuels.

Recent news indicates such a backlash isn’t likely to occur anytime soon. Take for example the record crude oil price struck yesterday of $100.10 per barrel. High demand and high prices for oil will translate into continued interest in alternatives, not to mention better margins for companies already producing biofuels.

Another squeeze is coming from coal. New coal projects are being canceled because of regulation fears, but other sources aren’t being built quickly enough to replace them. Industrial users will face power cuts within five to ten yeas, according to an energy executive speaking to Reuters, if more coal isn’t burned — and with the failure of the FutureGen project, any enthusiasm for new coal plants is unlikely in the near-term.

Cleantech projects can’t step in to fill the gap in that 5-10 year time frame, but energy shortages will spur demand for alternate energy sources, including biofuels.

And ultimately, even at full projected capacity two decades from now, biofuel production will likely still be far below demand. For more on why biofuels, and in particular cellulosic ethanol, are likely to remain a very partial solution, check out a past contributor post by UC Berkeley professor Ted Patzek. Also worth reading is this Biopact article on new land use practices that may invalidate more of the assumptions of the Princeton study.