You know an issue matters to Facebook users if a group about it numbers in the hundreds of thousands. Spammy applications, ones that send out needless email or trick you into inviting friends, are clearly an issue. One anti-spam protest group, called “This has got to stop” is now nearing half a million members, up from around 100,000 a couple months ago.

This group, and many other, smaller anti-spam groups, explain why there’s been a drumbeat of announcements from Facebook’s platform developer team over the past couple of months, directed at stopping behavior by applications that worsens the site’s user experience. Facebook wants these groups to go away.

The company will now let you adjust how much information an application can access about you, or even block invite requests from an application entirely (details here). This follows on last week’s news that the company will restrict the number of friends that a spammy app can let its users invite (our coverage).

Facebook itself is keeping pace with its users efforts to block spammy ads on their own.

The “This has got to stop” group points to a number of ways that you can block Facebook applications on your own, including links to Facebook’s privacy settings that let you block email from applications. But the group also links to other interesting things, like a Facebook application called Clean Profile, that lets you view your friends profiles without seeing all the lame apps they’ve tastelessly installed. The experience of using this application is not unlike turning web advertising off — you only see content and white space. For long-time Facebook users like myself, it’s like the clean feel that the site had back in the old days.

I expect traffic to rise to these privacy pages, as users come by to regulate apps. Facebook users have tended to not care about the privacy issues that have dominated headlines, as Nick O’Neill points out, when he takes a look at this Compete graph showing Facebook user traffic to its privacy pages. Only a fraction of users visit the pages on any give day, and the only spike of interest lately was when Facebook started publishing profiles in search engines last September — not when it launched its controversial advertising program, Beacon, later. 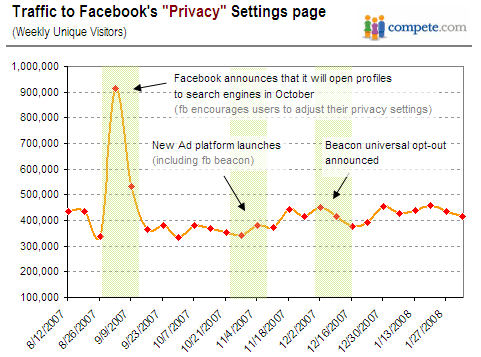 Meanwhile, the company is offering an increasingly clear set of instructions for developers, including best practices and a policies document with an ominously titled “escalation procedures” for punishing bad apps.
Facebook making Pages more monetizable

Facebook has also been busy tweaking its Pages feature — profiles, with extra features, for companies, celebrities and others — hoping these pages will prove to be a significant source of revenue. Facebook, for example, sells ads for Page owners, that appear on other parts of its site, that encourage users to come to the page.

Now, if you’re a bar or an alcohol seller, you can set age settings on the page to meet legal requirements, so only Facebook users 21 and up would be able to see the page. And instead of just having a profile picture on the Page, page owners can include dynamic, Flash-based content like videos. What’s more, users will be able to upload their own photos to pages, to create photo albums based around a company.

So you can imagine a band getting sponsored by an alcohol company, throwing a concert, putting a video of that concert on their Page (that includes the sponsor’s logo), then having its of-age fans upload their own photos from the concert.