FriendFeed is like Facebook’s news feed. But it’s more of a dynamic conversation among close friends about what they’re up to all over the web — and not so much a social network.

I’ve been using FriendFeed religiously this year, after reviewing it in detail last month, and I’ve been consistently impressed. So I’m pleased to report that the company is launching in public beta today, and has raised a $5 million Series A round from some of its own founders (early Googlers Paul Buchheit and Sanjeev Singh) and Benchmark Capital.

On FriendFeed, you can see your friends’ published blog posts and Twitter messages, their favorite YouTube videos, their uploaded Flickr photos — and their activities from more than other 20 other sites. You and your friends each pick the sites you use, that you want FriendFeed to track for you. Then every activity is presented in a running stream, with every item from all your friends appearing in chronological order on your FriendFeed homepage.

The dynamic action happens because of two one-click features: You can comment on your friends FriendFeed activity items or “like” an item — basically a vote, that shows your name and a smiley face next to the item.

The combination of nearly instant activities of your friends pumping through FriendFeed, along with the conversations that form around them, leads to a burgeoning, ongoing discussion.

A new comment or “like” triggers FriendFeed to send the item itself (and the entire conversation about it), back up to the top of the FriendFeed stream. This gives everyone a chance to continue the conversation.

Of course, you may wonder if Facebook couldn’t easily let its users do the same thing? Couldn’t Facebook just let people include their activity from among their friends, within their news feed? In fact, Facebook is working on this, according to one recent report.

The problem with this analysis is that FriendFeed has been emerging as a different sort of tool from Facebook. The Facebook news feed is already chock-full of your friends activities on Facebook, like when they add a new friend, break up with their girl/boyfriend, or decide to attend an event. This is information about your friends’ lives. FriendFeed, in contrast is purely about the online media you and your friends think is most interesting.

FriendFeed, as well, doesn’t promote the narcissism of a social network. Facebook is basically a huge game where people compete to have the most friends (or at least the most friends who are cool) the funniest profile descriptions, etc. Subscribing to somebody on FriendFeed only means that you’ll be able to see what they share on FriendFeed, and their comments.

As Mountain View, Calif.-based FriendFeed’s founders told me last week, it’s not about articulating relationships about everyone you know, it’s not about poking and who broke up with who, it’s not necessary to friend everyone in your address book — and, importantly, unsubscribing on FriendFeed is not a social stigma. 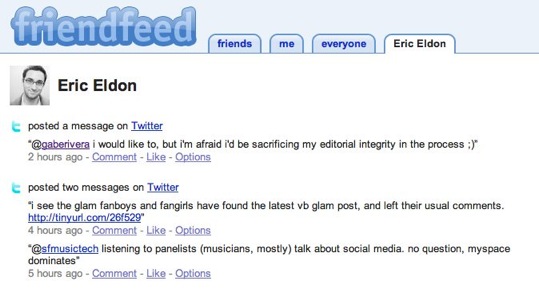 Since the company launched last October, the average beta user (typically a tech geek and/or blogger, from what I’ve seen) shares their activity on 3.5 other sites. Personally, I use it to share my stories on VentureBeat, my Twitter updates, and maybe my shared items from Google Reader.

FriendFeed allows you to see in the ‘stats‘ area what users you find interesting (by either ‘liking’ or commenting on their items), and which find you the most interesting. The site also allows you the option to see content that someone posted who isn’t necessarily a friend of yours – but rather a friend of a friend, if your friend commented on or liked that person’s item. Both of these features lead to finding users and content that is more valuable to you quite often then simply importing a contact list (which you can also do).

FriendFeed itself has made openness a focus. It lets you view your entire FriendFeed in its Facebook application, or in a widget that you can put on your iGoogle homepage or your personal web site. The company is also working on improving its mobile version and its application programming interfaces so third parties can gather information from FriendFeed for their own sites.