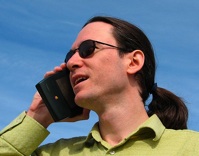 There’s a healthy debate going on right now about the direction mobile applications going forward. While the norm on mobile computing devices for a long time was native applications, the rise of Internet-enabled devices has brought with it access to web applications – and those web applications are increasing being specifically built for mobile usage.

On one hand, former Palm executive Michael Mace, believes native applications on mobile devices will give way to the web application variety. He speaks of the multitude of different operating systems and platforms we now see on mobile devices. He also talks of mistakes Palm made in thinking that mobile computing was different from the PC variety.

Mowser’s Mike Rowehl also believes this is very much an extension of the web application vs. native application debate going on in the desktop world. While he doesn’t believe it will be quite as simple as one killing the other he did tell us that going forward, “an increasing number of apps will be deliverable on the mobile web, with an increasing amount of revenue tipping that way.”

On the other hand, ZDNet’s Matthew Miller lays out some compelling points as to why he believes some native apps are here to stay. He contends that as easy as mobile web applications are to acquire sometimes (simply by going to their web address), that cannot replace the convenience of having it reside right on your device. He would willing to even pay for such applications versus paying nothing for the web-based ones.

Towards the end of his piece, Miller talks about Apple’s iPhone which is an interesting player in this debate. When it launched, Apple disappointed my developers by announcing that development on the device would only exist through its built-in Safari web browser. This basically meant that Apple was forcing developers to create web applications using languages such as JavaScript rather than allowing them access to all the bells and whistles Apple offers to its native applications on the device.

However, only a few months after its launch, Apple changed its stance on 3rd party native apps, and announced that an SDK would be coming in 2008 to grant developers access to the device (our coverage). This is interesting in the context of this discussion because it would seem to indicate a trend that is the exact opposite of what Mace is saying (coincidentally, Mac formerly worked at Apple).

In fact, Miller believes that 3rd party applications on the iPhone will start a trend of people wanting more native applications across the whole spectrum of mobile devices – something which could make Microsoft happy if Google’s Android is too reliant on web applications to mount a quick charge on Windows Mobile.

Also see our coverage on some of the security implications with the rise in Internet-connected mobile platforms. As well as our coverage on the mobile price war and its possible effects on the industry.