Yahoo continues to roll out new services post-Microsoft offer, tonight launching Yahoo Buzz, a popularity-based news aggregator. The site will take into account a number of factors including votes, search frequency and times a story is emailed to determine the most buzz-worthy stories. Top stories will be considered for placement on Yahoo’s homepage.

Yahoo describes Buzz as featuring “the most popular stories right now, determined by people around the Web. A story’s Buzz Score is based on your votes, searches, emails, and more.”

While the obvious comparison is to a site like Digg or Techmeme, the more apt comparison may be to a site like BuzzFeed or Yahoo’s own BuzzTracker, which are less based around tech news. In fact, Yahoo Buzz only features tech news in its ‘more’ drop down menu, 3rd up from the bottom.

Ask’s recent BigNews aggregator also has many similarities (our coverage).

Yahoo purchased BuzzTracker last September for a price reportedly around $5 million (our coverage). While the purchase was thought to be made at the time to bolster Yahoo News, BuzzTracker has largely gone unchanged and unintegrated into Yahoo’s plethora of sites.

Popularity based on votes has been done many times before, most notably with Digg. Yahoo’s addition of it’s search playing a roll adds an element of Google Hot Trends to the mix, while email frequency rounds out what should equate to very popular stories indeed. 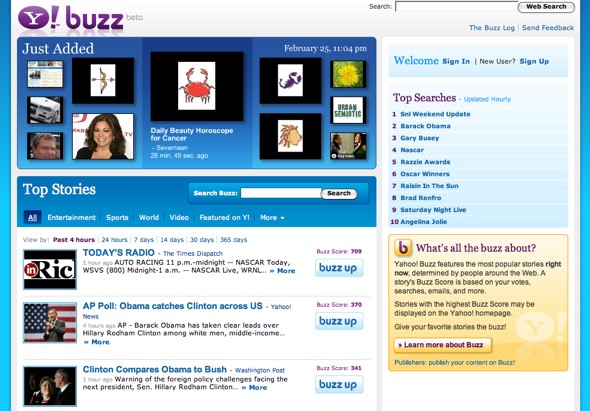 One potential downside is that the site will less than 100 pre-approved news publishers at launch. This simply cannot match the variety a site like Digg, Techmeme or even BuzzFeed has.

At the same time, that will ensure that sites lucky enough to make it to Yahoo’s homepage from Buzz should be able to handle the traffic – unlike many sites that make the frontpage of Digg. Yahoo told TechCrunch’s Mike Arrington that 2 million visitors were sent to a Wired article that was linked to on Yahoo’s homepage for a mere 2 hours.