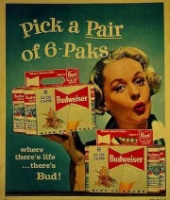 US internet ad market is big, getting bigger — Two separate analyst groups estimate the US online ad market at $21.1 billion and $22.5 billion, respectively. Either number works out to well over 20 percent growth from last year. The global market is estimated at $45 billion. TechCrunch has a slightly longer summary.

San Francisco, home of the carbon tax? — Mayor Gavin Newsom said he’d like to set up a plan to tax the carbon emissions of businesses in San Francisco this morning, during an early morning keynote at the Cleantech Forum. Confusingly, this appears to be a ballot issue for the city, separate from an emissions tax already being considered for the entire Bay Area. Newsom’s plan also involves congestion fees for inner-city driving, a measure typically only considered by much larger cities like London and New York. For a rundown of some possible pitfalls, Earth2Tech has a good brief.

Google to become a Yelp competitor? — If not Yelp, fill in the name of your favorite local listing service. Google Maps now has user ratings and “neighborhood refinements”, a pair of user-generated stats that could help you find the best local businesses by pushing them up in Google’s search results.

Wal-Mart launches cleantech accelerator — Also at the Cleantech Forum, Wal-Mart announced the cleantech accelerator, an open call for applications from green and energy-efficient technologies that could benefit the retail giant’s business. No word on whether proof of residence in China is required to apply. 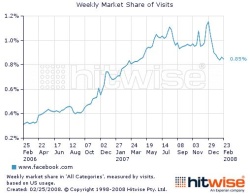 Visits to Facebook appear to drop — Traffic to Facebook has dropped about 27 percent from its peak, according to the latest Hitwise stats. However, the drop can probably be explained away by a post-holiday seasonal trend. The average time users spend on the site has continued to rise.
Proofpoint raises $28 million for email security — About $58 million had already gone into Proofpoint prior to this round, so this latest investment pushes the Cupertino firm into the funding stratosphere, at least as email companies go. We’ll have more details tomorrow.

Piczo suffers from walled garden approach — Teen-oriented social network Piczo appears to have taken a serious traffic hit in the United Kingdom, perhaps due to its more restrictive joining policies. The network aims to create a safe place for 13 to 16 year olds, but being closed isn’t helping it against its more popular competitors, including Bebo, MySpace and Facebook (which opened up last year). Piczo has laid off about a quarter of its staff, according to Valleywag.

Covad could save Silicon Valley municipal wireless — By focusing in on business use instead of trying to address the much broader consumer base in the region, high-speed wireless firm Covad might manage to revive the plan for municipal WiFi in Silicon Valley, which appeared to die last year. The network would serve group including local fire and police, which would in turn help pull in more grant money. More from InfoWorld. Another promising venture in the municipal wireless space is Meraki, which plans to roll out free WiFi in San Francisco, as we recently reported.

Fundability takes $500,000 second funding — Fundability, a connection platfom for entrepreneurs and investors, appears to have received a fairly unusual second round of funding, at one-sixth the size of its $3 million first round in January. The company also launched its online marketplace for the public, claiming that several startups already received funding on the platform during the private beta. We’ll see how it fares now that the rabble can come in. The investment amount was reported by VentureWire (subscription required).

Google joins consortium to build transpacific fiber-optic cable — The move is the first time an Internet company has invested in an ocean-spanning cable. Story here.