Google today is launching Google Sites, a new powerful addition to its application platform, and an ambitious effort to let you take business collaboration to a new level.

The application, built with software it acquired from wiki company JotSpot more than a year ago, offers you a way to easily integrate applications created from Google’s other Web offerings — spreadsheets, docs, videos, etc. — and then collaborate around them.

Most significantly, it’s the latest move by Google to entice you to transition to Google’s “cloud,” its collection of severs that lets you store and manipulate your data cheaply. It’s a continued challenge to Microsoft’s grip on office applications: Indeed, Microsoft’s effort to buy Yahoo is also seen by some as an effort by that giant to acquire online customers who will one day use its own cloud, to fend off Google.

We’ll explain how Google Sites works, below. The idea behind Google Sites is to provide you a tool that lets you easily build intranets, project sites, classroom sites, employee profiles or whatever else your company needs to better organize the data they wished to put online. “Click a few buttons and have a huge swath of infrastructure taken care of,” Google Sites senior product manager, Scott Johnston told us. Note: He’s the former vice president of products for JotSpot.

Google has so far activated more than 500,000 organizations to use Google Apps including Genetech, Salesforce.com and Proctor and Gamble. Google also claims strong growth in the higher learning field with USC, Clemson and UNC Greensboro among others all utilizing Google Apps.

While being affiliated with such large names is nice, Google wants to make it clear that Sites can be used to build functioning websites for organizations that employ five people to those that employ 50,000.

Creating a new site with Google Sites is very easy. If you’ve used any of the other Google Apps – or even just iGoogle, you’ll likely feel right at home with the control and menu schemes found here.

You can start out by creating a front page for your site and from there decide whether to add more standard pages or utilize Google other built-in page types which include:

Dashboard – a page that is broken down into sections, where a wide variety of embedded web elements can be added.

Announcements – a page that allows you to leave quick blurbs — great to use as a blogging tool.

File Cabinet – a page that will create a list of files you upload.

List – a page where you can easily create customized lists.

Johnston promises these page types are just the beginning and more will be added as the service grows. 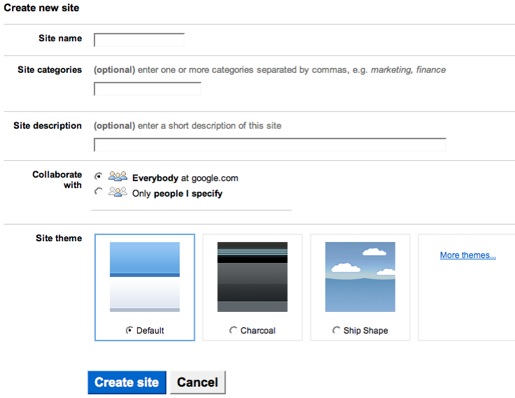 Above: The site creation page with some default theme options.

One of the major strengths of the service is just how well it interacts with the current Google applications. Inserting a spreadsheet created in Google Docs for example is as easy as selecting ‘Spreadsheet’ from a gadget drop-down menu and pasting in the URL where your spreadsheet can be found. You can manipulate how large or small you want the spreadsheet to show up on your page in this same window.

By using this URL-based system, Google is also able to offer the ability to update these embedded spreadsheets (or documents, presentations, etc) in real time as you edit them in the Google Docs application. This way if you have say, financial information you wish to display to your company on your new Google Sites page, instead of having to copy and paste it over from your spreadsheet each time you update, you can instead just do it once on the spreadsheet and it will automatically refresh on your Google Sites page.

As this is a Google product, naturally search will play an integral part as well. Site users will be able to conduct queries to find anything on any of their sites’ pages with ease.

For sites’ look and feel, there will be a few select themes at launch (as pictured above), and much as with iGoogle, more will be added over time.

While many end users often mention their reluctance to hand their data over to Google for them to store on their “cloud,” Google assures us that they have one of the largest security teams in the world to make sure that your data will be safe. Johnson conveyed the thought that one day the idea of sending your data over to a company like Google to store will be perceived as no different from handing your money over to a bank for it to store.

As for those who think Google is the one they shouldn’t be sending their data to? Well, this product probably isn’t for them.

All sites can be set to be either public or private, with the same option given to set who can edit pages. 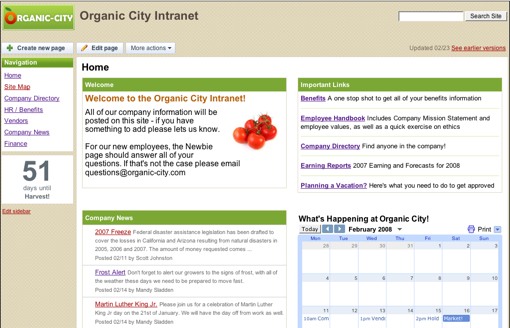 Above: An example of an intranet site created with Google Sites.

In terms of storage space on the “cloud,” Google Sites will use the same 10 gigabytes of storage that is shared by all Google applications on the free ‘standard’ and ‘team’ packages. Premium members – those paying $50 per user account per year – will have more storage based on a per user basis. Both levels will receive more storage over time as has become Google’s standard practice.

While the simplification of collaboration is the main goal of Google Sites, Johnston did say that the ability to monetize these pages was definitely within the scope of where they would go in the future. Presumably this would come from the ability to add AdSense ads to pages, but Johnston also mentioned the creation of sites that utilize Google Checkout to sell products and services as a potential future option.

Google also recently resurrected another purchase from last year, GrandCentral – see our coverage on that here.