While it may be marred by poor ratings, NBC’s debut of the “Quarterlife” series is still a historical occurrence in the internet and entertainment worlds. The series is the first direct-to-internet television show to have been purchased by a traditional television network, and poor performance aside, still marks a pretty dynamic moment for the future of television and internet video.

The show, which centers around a cast of hipster twenty-somethings, was created by Marshall Herskovitz and Ed Zwick (My So Called Life, Thirtysomething) and launched on MySpace.com with impressive enough numbers to prompt NBC to buy it (click on still-frame below for a taste). If the series’ debut alone isn’t a sign of the times, the fact that something was born on a Fox-owned platform (MySpace), bought by rival NBC and first previewed on rival MTV definitely confirms it. It comes in the wake of a handful of other internet series success stories (Prom Queen, Wallstrip) of the past year.

Castings for “internet shorts” have escalated in the past few months and are no longer held just by college kids and indie producers but recognizable, established players. The team behind Prom Queen has a new production in development, actor/comedian Damon Wayans is launching a new comedy video startup project and it’s rumored that director Robert Rodriquez is producing a new web series. Even Quarterlife was not without its own star-studded crew. Perhaps driven by empty time during the writer’s strike, the web short has become Hollywood’s new baby. 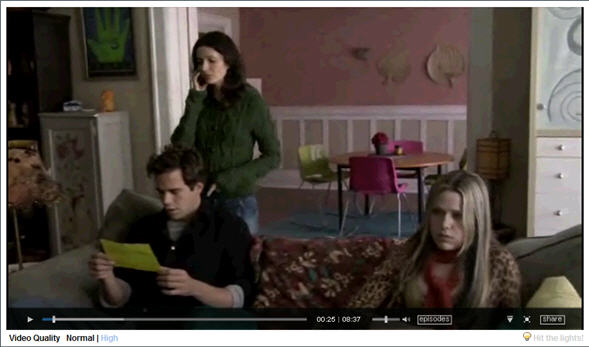 In the big picture, this move marks the continuing evaporation of the line between broadcast television and the web. The future of the internet’s infrastructure dictates a full convergence between the two, but the arrival of web shorts shows that the convergence has at least begun. For television networks, this is a time to refine traditional processes to make better use of the web. Quarterlife was actually pitched as a traditional pilot, rejected by networks and then repurposed as an internet series before catching enough of an online following to push its sale to NBC. Perhaps the web will become TV’s new testing ground.

If there’s one thing we can deduce from all of this, it’s that internet video has a long way to go before it fully matures. The television industry has long tried, mostly unsuccessfully, to find ways to tap into web talent and concepts, but where user-driven content has failed, professionally created content –- even by independent producers –- may still be the formula that finally fits. Unlike most internet ventures, the industry has deep pockets and certainly knows how to take a hit when a project fails. In fact, failure is usually factored in. Just today, ABC announced its digital plans.

For online video startups in general, this new opportunity might spell salvation in a very crowded, still-evolving marketplace that hasn’t yet figured out exactly what works. It could also be sweet validation for sites like Maniatv.com (funded by Benchmark Capital), which offers professionally produced content. Early video content sites that shifted from user-produced to professionally produced content, like Sony’s Crackle, are reporting an increase in ad revenue, and Hollywood’s attention on web shorts may spell potential opportunity.

The early mindset will of course be to try to develop sites that are trolled by network executives to drive users, but smart video sites will focus instead on becoming the broker between the two, or position themselves as independent internet television networks to expand revenue potential. The problem is — and this is why failures will probably outweigh successes at the moment (hello, Quarterlife) — internet video is still very early. Young startups of all kinds, as well big network efforts, are more than likely going to see rough seas ahead.

[Update: Quarterlife is moving to the Bravo cable TV network.]