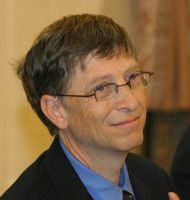 Microsoft unveils betas for IE8 and Silverlight 2 — Microsoft is launching new versions of two major products in testing mode: the Internet Explorer 8 web browser and app development tool Silverlight 2. Major IE additions include “Activites”, which allows users to send information from a web page to a web application (you could send a VentureBeat article to Digg, for example, although our site already makes that pretty easy), and “Webslices”, which appear to work like RSS feeds, but for any content on a website. Silverlight 2, meanwhile, offers a new “Deep Zoom” feature and more than 40 new controls.

When it comes to humongous fortunes, Bill Gates is number two — Speaking of Microsoft, co-founder Bill Gates is now only the second-richest man in the world, according to Forbes. Gates has been the richest man for 13 straight years, but he’s been eclipsed by Warren Buffett’s $62 billion nest egg. In the same article, we also learn that Buffett is “America’s most beloved investor.”

Jobs to iPhone users: No Flash for you — Apple chief executive Steve Jobs says iPhone users won’t be able to access Adobe Flash content anytime soon. The problem, he says, is that Flash Lite (the mobile version of Flash) isn’t advanced enough for iPhones, while Flash itself is too slow on the iPhone. “There’s this missing product in the middle,” he says. Robert Scoble speculates on what’s going on beneath the surface. Meanwhile, you can read some of our coverage of the the battle between market leader Flash and Silverlight here.

Yahoo stymies Microsoft by extending board vote — And now for your daily dose of Microsoft/Yahoo news. Yahoo has delayed the deadline to nominate board directors from March 14 to March 24. Since Microsoft is trying to get pro-takeover directors on the board, the New York Post sums up the delay thus: “Your move, Mr. Ballmer.”

Why do Facebook apps jump the shark? — Andrew Chen offers some math-heavy thoughts on when and why Facebook apps start losing users (or, to borrow a phrase from TV, jump the shark). His conclusion probably won’t surprise you: after the initial flood of invites, retention is key.

Trade media company Ziff Davis files for bankruptcy — The company has 266 employees, is in debt for about $500 million and publishes magazines such as PCMag, 1Up and Extreme Tech. PaidContent notes that that filing is a bit vague when it comes to how everything went wrong, although the company does say it didn’t develop Internet publications quickly enough.
European regulators to approve Google acquisition of DoubleClick — A ruling could become as early as March 11, says Bloomberg. Microsoft has complained the deal (already approved in the United States) would hurt competition.

Swiss banker Julius Baer drops suit against WikiLeaks — The move follows a federal judge’s decision to reverse his own injunction shutting down the whistleblower site. Baer can refile the suit, but it’s hard to imagine he’ll get much traction, according to BetaNews.