Gigya, the Silicon Valley company that lets companies including RockYou track how advertising performs on their widgets across the Web, has raised $9.5 million in a second round of funding from Mayfield Fund and existing investors Benchmark Capital and First Round Capital.

Gigya, based in Palo Alto, Calif., offers ad-monitoring technology among a number of other tools it supplies to widget-makers like RockYou. Gigya helps companies make widgets, but its real focus is on helping those companies — clients include Toyota, Sprint and MTV — spread the widgets across the web and track their performance.

Gigya’s technology is used to install hundreds of thousands of widgets per day, the company says. It tracks more than three billion widget impressions per month. It says it is the largest widget distribution network (for proof, check out the logo-cloud above, which shows the companies it serves).

However, large widget companies like Slide use their own internal technology for distribution and tracking advertising impressions. Clearspring is another competing company, but Clearspring hosts widgets on its own servers, and so maintains more control over the widget making and distribution process. Gigya, by contrast, simply provides a code that is inserted into widgets, and customers like Toyota can choose to run the widgets from their own servers.

Gigya hasn’t focused too much on making money too date, instead it seeking to become the distribution standard on the Web. But it does plan to make money from revenue shares, for example from a company like Toyota, which might pay Gigya a fee for help in distributing its widget to third-party sites.

Co-founder Rooly Eliezerov told me he hopes the company will reach break-even within the next year and a half. 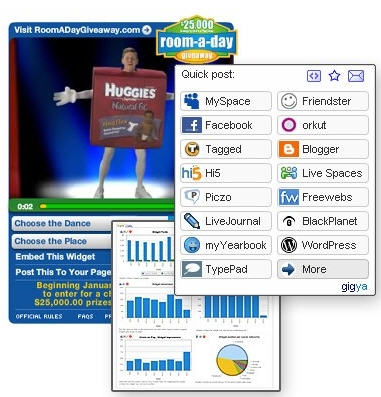