DropBox, a Silicon Valley company that is trying to make online file storage and sharing more simple, has come of out of secret testing and is sending out invites for people to use it.

We’ve seen DropBox in use, and it’s a solid product that makes storage and sharing a lot easier than products offered by a bajillion other companies.

We wrote about the company last year, when it demonstrated at a YCombinator event. It is akin to Omnidrive, Sharpcast, but as we noted, its simplicity and elegance sets it apart.

It works seamlessly with both Windows and OSX and other operating systems.You put a file into your DropBox folder, and within seconds, it is synced across your PCs, and available if you go offline. Should you accidentally erase a file, DropBox lets you undelete it, or roll back to a previous version.

DropBox has also offered a way to share entire folders with friends. You can drag and drop photo files for anywhere on your desktop in a shared folder, and your friends get notified that the photos are in their own folder on their desktop (they need DropBox). If your friend doesn’t have DropBox, they receive an email, which carries a link with URLs to all the files, so they can still see them.

Here’ a screencast about how it works. If you link your Flickr account to DropBox, it gives you away to drag and drop folders from desktop directly into Flickr.

Both the juggernauts (Microsoft and Google) and a horde of startups have been trying to solve these problems for over a decade if not longer. Google’s been working on some kind of cloud/desktop storage product, but hasn’t delivered yet.

DropBox is still in development, and is working to make its configuration with things like Outlook much easier. But it already lets you backup your large multi-GB .Pst files (containing your contacts, for example) easier than some other products do. Competitors Box.net, for example, don’t let you save such large files — it forces you to break them down into smaller chunks and then same them, creating a hassle for most users who aren’t tech savvy.

One advantage of DropBox is that it has used C++ to basically integrate the product within your operating system, so you don’t have to deal with an entirely different interface (which a company like Sharpcast does, requiring use of a separate file manager). With storage company Box.net, you have to sign in before you can change and store something — as its completely web-based.

DropBox is doing a lot, considering it is a team of three. Co-founder Drew Houston says the company aims to the most all-encompassing product, a single place where you can put all your important stuff. The company had raised a seed round of funding, and will announce details later. The only question is (as reader below also asks), is DropBox too late to market, now that there are so many other players already in the game?

VentureBeat readers can click on this link to get an invite (there are a total of 200) and sign up. 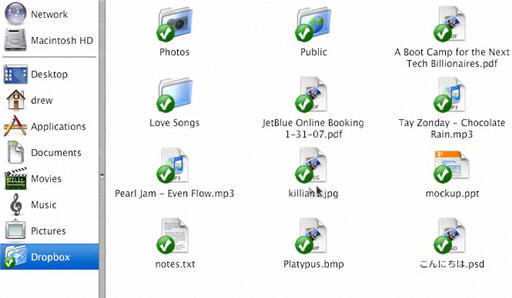