One of the more useful gaming-related panels so far at the SXSW conference in Austin was one I just attended called “Serious Revenues”. On the panel were Adrian Crook of Free to Play, Nabeel Hyatt of Conduit Labs, Joe Hyrkin of Gaia Online, Jeremy Liew of Lightspeed Venture Partners, and moderator Michael Smith of Mind Candy.

Although the panelists meandered over more topics than just revenue, there were a few good soundbites on current practices and ways some of the top companies are making money. I’ve summarized some of the best bits below — not in the order they were discussed, but by how interesting they seemed.

Just in case you didn’t learn from cigarette companies that it pays to advertise to kids, Gaia Online is proving it. Hyrkin said that sponsorships are pulling in from $75,000 to $200,000 each per month, and the company has had dozens of sponsorships. The amount is growing, too; an upcoming sponsorship with Nike will pull in a high six-figure amount.

Going about injecting a brand into the game world is tricky, though, he says. One example of a well played sponsorship on Gaia was one with Scion, a car brand. Players on Gaia tend to like shiny, pretty items — which helped drive the “sale” of about 700,000 virtual Scions to the userbase, which includes about five million active players a month.

I write a lot about micro-transactions, in which players pay for in-game advantages but pay nothing to play. However, for a teen- or tween-oriented game like Gaia, that doesn’t always go over. Kids generally don’t have credit cards.

As a result, Gaia’s been getting tons of money in the mail. Hyrkin related a story of a kid who paid $15 for an overnight Fedex of a $5 bill, to be sure he got his item on time. To solve the problem, Gaia has been selling gift cards in big-box retailers like Target. The gift cards carry a code number, which kids then use to pay for their item.

However, smaller companies won’t have that option. One of the other panelists suggested subscriptions as a good option for any game oriented toward kids. Subscriptions get a lot of flak because people like getting everything on the internet for free — but for parents, a subscription can be a desirable thing, as it tends to keep games more closed off to online predators (and keeps kids from stuffing so much money into envelopes).

Yet another option is merchandising. Bella Serra, for instance, sells cards that Smith called “Pokemon for girls”. Essentially, you buy the card and enter the code from it online, where you get a virtual horse in return. The connection to a real-world commodity (in this case a playing card) makes players feel more engaged.

Hyatt says the key to item sales is “monetizing the engagement loop”. That means providing users with items and abilities that fit in with the game world.

Three good examples came up. One is items on World of Warcraft, which Liew said are all about “awesome awesomeness”. Players want items that make their characters more powerful. On Gaia it’s more about shiny, pretty things — as with the Scion partnership. 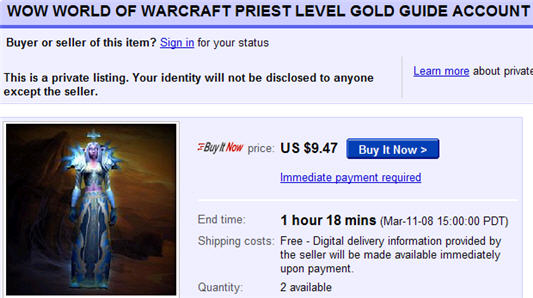 World of Warcraft digital assets prove their currency on ebay.

Perhaps the most interesting, though, is Habbo Hotel, which Hyatt noted had achieved great success with a WWE (pro wrestling) sponsorship. Players on Habbo love to role-play, so when they were allowed to take on the avatars of famous wrestlers and re-enact matches, they couldn’t get enough.

Another great way of driving engagement is allowing user modification. That can mean various things. For a shoot ’em up like Doom, players want to make their own maps. On Second Life, they want to build houses. However, all the panelists were skeptical that users could ever help construct the actual game — the basic framework, they say, must be set by the company.

During the Q&A session, the question of culture came up. South Korea is often brought up as the golden example of a game-loving culture, where players use games as part of everyday social interaction. However, Hyatt suggested that gaming companies in the United States actually need to focus more on the social element than their South Korean counter-parts.

The reason is the stigma of being a “gamer” in the US. Most people play some sort of game, even if it’s just Solitaire or Bejeweled on their mobile phone. But it’s not socially acceptable in the larger culture of the United States, so people usually game in private, rather than with other people, as South Koreans do.

So, because there’s less of a real-world social connection with other people, multi-player US sites will need more ways of encouraging their players to directly interact with each other.

Culture came up once more: The panel seemed to feel that games are currently proving out revenue models that will spread far beyond games. There are a lot of activities that occur on the internet, from social networking to banking, that could benefit from such practices as virtual item sales (which Facebook already does) and real-world merchandising.