Two announcements this week show how some of those silly MySpace widgets and annoying Facebook applications are becoming real businesses.

First, the rock band R.E.M. is going to release its latest album Accelerate through iLike, streaming the entire album across iLike’s Facebook, Hi5 and Bebo applications and its other services. It is the first time that a band this large has released an album through iLike.

Second, widget service provider Gydget has struck a deal with indie music marketer and distributor The Orchard, to distribute music through widgets on MySpace and other social networks.

R.E.M. is working with iLike because the Seattle-based company has sewn together its many properties into a service for musicians that it calls a “universal artist dashboard” (our coverage). This dashboard is proving useful for major acts, like R.E.M., because they can publish a new album, a demo song clip, a video, a concert schedule or other information on social sites and music services across the web. 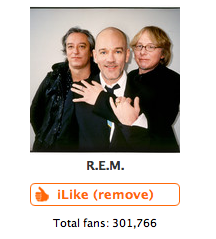 Here’s how: ILike quickly became the dominant music-related service on Facebook, after the social network’s developer platform launched last May (our coverage). Its applications let you play a music quiz game, put clips of your favorite songs on your profile page, and see when your favorite bands are playing near you. More recently, it has expanded to rival social networks with developer platforms, Bebo and Hi5 (our coverage). It also offers desktop plugins for iTunes and Windows Media Player (here), as well as its free-standing site and an iPhone application. Applications for Orkut and MySpace are slated to launch soon.

The dashboard is now used by more than 200,000 musicians, and around half of the top 500 musical acts in the country, including Radiohead, Jewel, Linkin Park, and others, the company claims. Its dashboard reaches 23 million users, total.

U2, for example, published an original song through the dashboard earlier this year, and gained 300,000 new fans — and 10,000 new fan comments — within a week.

R.E.M. has a slightly more complex plan in store for iLike. Essentially, it is streaming its album across iLike properties, but not letting users download it. The band start streaming the album on March 24, a week before the album itself goes on sale in North America. ILike is letting fans pre-order it on iTunes and Amazon’s music store. R.E.M. will also broadcast an exclusive video message about the album, that it will distribute via iLike.

Note: In case you’re wondering how Facebook’s own music efforts (our coverage) might compete with iLike, iLike’s chief executive Ali Partovi tells me that he’s not staying awake thinking about it. He points out the Facebook chief executive Mark Zuckerberg repeatedly went out of his way at the South by Southwest conference to mention iLike and how it’s doing a great job. Also, Facebook’s own fan page for R.E.M.has nearly 2,000 users, while iLike’s R.E.M. page has more than 300,000.

Another note: In case you’re wondering how iLike might work with MySpace, which itself got its start through being a social network for musicians and their fans, Partovi says that the relationship will be symbiotic. The company is experimenting with linking musician’s fan pages on other applications to their MySpace pages, as opposed to creating iLike fan pages within MySpace and linking to those. ILike will also release applications on MySpace, such as its music quiz application. But Partovi concedes that MySpace is a more competitive environment overall than the other social networks, with a range of third parties already running music-related applications, such as Imeem and its MySpace playlist widget.

So where’s the business angle in all of this? ILike is already among the top five traffic sources for iTunes. It is also one of the top five sources of ticket sales for concert ticket-selling service TicketMaster, one of iLike’s investors.

Meanwhile, widget company Gydget (previously event service Attendio; our coverage) has been working on its widget distribution service. The site lets anyone create a simple widget that they easily put their social networking information inside of. For example, for bands on MySpace, Gydget’s widget lets them enter their user ID or profile URL, then it imports their images, events, MySpace blog and YouTube videos. After a band creates the widget, it can easily update the widget with new information, such as tour dates.

The company, which faces music-focused competitors like Splashcast, says that in less than four months, more than 800 “major” recording artists have started using its widgets, with more than 15 million people seeing these widgets each month.

The Gydget widget is a way for a band to let its fans do the marketing, because fans can put the widget on their own MySpace profile or other web page. In general, Gydget says that 78 percent of all clicks and 80 percent of all video plays within the widget happen on fan sites.

Each band will see varying — but good — results from these widget. The hard rock band Rise Against has 45 percent of its fans view information about it through its widgets on friends profiles, not its own MySpace page. The German band Tokio Hotel gets 44 percent of views on the widget, 29 percent of clicks and 28 percent of video plays.

The Orchard is giving any of the artists on its partner labels custom access to the Gydget widget creator, integrated within its existing distribution and marketing services. For smaller bands — the core of The Orchard’s 10,000 independent labels — every little bit of publicity is important.