Not seeing many, we were going to propose changing the name of Silicon Valley to Social Networking Valley. But now eASIC, a maker of rapid-turnaround custom chips, comes along to remind us that it’s still possible for start-ups to raise more money in the semiconductor field.

eASIC says today they have raised $48 million in a new round of venture funding from Khosla Ventures and Kleiner Perkins Caufield & Byers. The company says its combination of speed-to-market and customization gives it the benefits of two different kinds of chips: field programmable gate arrays (FPGA), which have a fast turnaround, and application specific integrated circuits (ASIC), or low-cost custom chips.

It takes a big bet like this to get funding for a chip company these days. Asked if he had any trouble raising money, Ronnie Vasishta, CEO of eASIC, said, “We didn’t go out to pitch widely among VCs this time. Maybe we might have got that reaction about not being a social networking company if we had. The shine has gone off the silicon a little bit. But we have a very big opportunity.”

The ASIC industry is about $20 billion, but the number of ASICs being designed has fallen. Only the highest-volume chips can be made as ASICs, given the high upfront costs. The FPGA industry, meanwhile, is about $3.7 billion.  ASICs go into just about every major consumer electronics product, from TV sets to set-top boxes and game consoles. eASIC has a chance to steal some of this share from the ASIC business and enable new devices where entrepreneurs aren’t counting on selling millions of units at the outset.

It has been eating away at the ASIC share, on and off, because FPGAs can be made in rapid product design cycles. Vasishta says that by making chip design easier and less expensive, eASIC could make life easier for chip startups and thereby enable more of them, even if they aren’t doing Facebook applications. 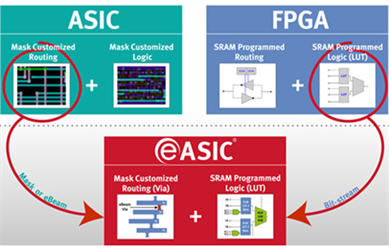 Normally, it takes $1 million of design resources and a 16-week production process to make an ASIC. Santa Clara, Calif.-based eAsic can create custom chips without the up-front engineering costs and deliver its chips within four weeks. The upfront design costs are typically only $20,000 to $100,000, said Vasishta.

eASIC can do this because it spent about five years, from 1999 to 2004, figuring out how to customize a generic chip with a minimum amount of headaches. It can now do so, Vasishta says, by laying down a single layer of metal on top of a nearly-finished chip at the very end of a manufacturing process. In the past, other companies have tried to do this, including Vasishta’s alma mater, LSI Logic. But too often those attempts required more elaborate customization procedures on multiple layers in the manufacturing. Hence, they weren’t as fast or low-cost, he said.

The chip architecture is fairly modular itself and that makes it more predictable to manufacture, Vasishta said. Thus, the chip has the flexibility of a FPGA — which are typically easily programmed but available at high costs — without the additional costs of one. Vasishta also says that his chips consume 10 percent to 20 percent of the power of an FPGA.

A chip design takes perhaps a couple of months. Then, once the design is finished, a customer can get a chip out of the factory in four weeks. By comparison, ASIC chips normally take about 18 months to deliver.

Also participating in the round were Crescendo Ventures and Evergreen Venture Partners. eASIC’s chief financial officer, Craig Klosterman, also invested in this round.

The company says that it has customers with a wide variety of applications such as portable video devices, cell phones, wireless base stations, routers, gateways, video surveillance, digital displays plus others.

Part of the reason is that the company spent a lot of time in development with ST Microelectronics, the European chip maker. eASIC has been shipping the 90-nanometer version of its chips since 2006 and it has customers among the top-20 semiconductor companies as well as a number of consumer systems companies.